The Return of the Soldier – Jermyn Street Theatre, until 20 September 2014 (Tickets)

The Return of the Soldier is one of a number of WW1-themed productions out this year that, if nothing else, proves that theatre land is not entirely unaware of events in the outside world. Having always been a sucker for a new musical and with source material that gives voice to the rarely heard, it was one of the few that intrigued Civilian Theatre enough to be filled with a genuine sense of anticipation.

The production adapts Rebecca West’s novel about a shell-shocked captain who returns from war and turns the lives of the three female protagonists upside down. The original novel is remarkable for its frankness in tackling 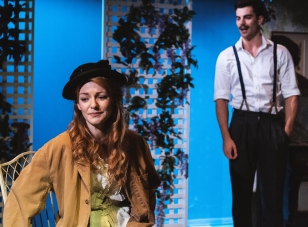 these issues before the war had even ended and presents an openness to issues of class and gender that reflects a Britain on the cusp of a series of social revolutions that ultimately were as important as the war in ushering in a post-Edwardian modern era.

The plot is simple enough but contains a refreshing moral ambiguity that makes it difficult to take sides with the characters. The damaged captain cannot remember his wife and instead has eyes only for his young love, a lower class girl he met years ago on Monkey Island. Now both married, they find themselves caught in the rapture of the life they could have had. Yet it is Margaret who must carry the burden of unfaithfulness and remember they are trapped within a fantasy of his creating. Eventually they must re-engage with the real world and he must face the trauma that stops him connecting with the present.

The decision to turn it into a musical is a curious one and the limited space at Jermyn Street necessitates a chamber approach; it would be difficult enough to swing a cat in the space and it is a credit to Matthew Cole’s dextrous choreography that there were at least a couple of items that could be called dance numbers. This fluidity was generally matched in Charlotte Westenra’s direction that stopped the cast from tripping over one another, and managed to create two very distinct worlds on one very small stage.

The cast and musicians also deserve praise for modulating delivery to match their surroundings. One of the biggest criticisms reserved for Dessa Rose, a similar ‘big theme-little venue’ chamber musical at the Trafalgar Studios, was that it seemed to be produced with one eye on a larger theatre and during the bigger numbers the audience were subjected to a sonic assault. The Return of the Soldier was beautifully delivered, at exactly the right volume. Delivery matched the style and crucially it recognised that lyrically clarity does not necessarily equate to maximum volume.

Technically the cast are excellent and move seamlessly between the prose and song elements. Michael Matus almost manages to steal the show as William Grey/Dr Anderson, but there isn’t a noticeably weak link among them. Matus’ portrayal of William is essential for setting up the complex moral choice faced by Laura Pitt-Pulford’s Margaret; his husband is the essence of quiet decency, an undemanding figure who could easily have walked out of Alan Bennett’s Talking Heads and there is real poignancy in Matus’ rendition of ‘The Little Things I Need’. He also gets a chance to flex his comic muscles as Dr Anderson, and the number ‘Head Master’ is charmingly vaudevillian and provides a welcome injection of the energy as we settle back after the interval.

Whilst there are good songs littered throughout, the overall impression is of songs that are entirely serviceable without being particularly memorable. It opens with its strong number, ‘The Return of a Soldier’, which is very 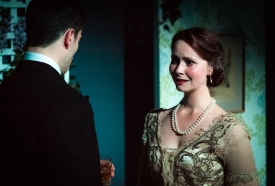 reminiscent of Sondheim and features some lovely harmonising between the three female performers, it also contains a delicate leitmotif that we find is returned to throughout. Other numbers are pop up throughout and there is a real sparkle to Zoe Rainey and Stewart Clarke’s ‘Are You Satisfied?‘  However too many of the songs seek to ape Sondheim a little closely and to an extent serve as a reminder that Sondheim’s magic is to make something extremely difficult seem dangerously easy.

The triumvirate of Stewart Clarke as the returning Captain Baldry, Zoe Rainey as Kitty Baldry and Laura Pitt-Pulford’s Margaret have a strong rapport and provide an emotional heart to the play. Zoe Rainey is superb as she finds brittleness in Kitty which gives a certain depth to what otherwise would have been a rather two-dimensional role, and something that risked overbalancing the carefully weighted plot dynamics.

There is a real bleakness at the heart of this musical and the ending is at best bitter-sweet. It could never be anything less and provides suitable, if rather melancholic, closure given the horror of the times. It finishes with Charles and Margaret returning from their private Neverland, and this ultimately means a return to war, a return to rigid class structures, and a return to the drudgery of life.  The lights do down and all we are left with is Kitty’s proud but hollow statement ‘he is cured’.

Read what others think:

One thought on “The Return of the Soldier”