The latest adaptation from Hiraeth Artistic Productions – following reworkings of classics like Titus Andronicus and Blood Wedding – has a somewhat inauspicious opening scene. We see Hamlet arriving to prison and for a while it seems we are set to watch his transfer in real time; paperwork is laboriously filled out, jewellery relinquished and, somewhat gratuitously, a stripsearch is implemented. 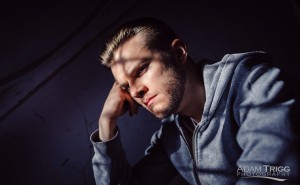 It is all very stripped back, natural, pretty much inaudible and what could be discerned wasn’t any Hamlet that this reviewer had ever heard; it was more like stumbling into a mumblecore adaptation of Scum than Shakespeare most famous tragedy. However from this worrisome start the first half cracks along under Zoe Ford’s pacey direction and carefully planned staging, making innovative use of a flexible set to allow prison’s claustrophobic atmosphere sufficient room to breathe.

Last year the CASA Latin American festival brought the Bolivian Hamlet de los Andes to the Barbican Pit. It was a production that sparked with wit and invention and, following Ostermeier’s version in 2012, demonstrated entirely new interpretations on Hamlet’s themes in a manner that breathed fresh life into the text.

So the fact that Hiraeth have cut 50 minutes from the running time shouldn’t necessarily be seen as a terrible idea. It can be seen as heresy to cut Shakespeare but one must remember that the text itself is just one element of a production; it must battle against the demands of director, designer and actor. It also recognises that a play should be accessible to its target audience and that if you are going to aim it at schools (which surely is the market for this version) then it is not unreasonable to think that those who are only there because it is a GCSE core subject may see being subjected to three hours of theatre as a cruel and unusual punishment.

The idea of setting it in a prison did make this reviewer wince. The concern about taking on such a high concept approach is that whether the play can be made to work without requiring serious stylistic contortions for plotting to make sense. 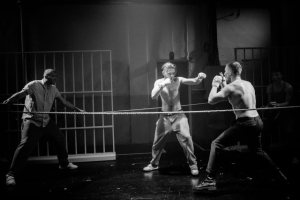 Part of the production does fall prey to this problem – for instance the Polonius/Ophelia/Hamlet portion could not be saved and character motivation was inevitability incoherent throughout. Do we really believe that Polonius, no matter how scheming, would ask his daughter to meet a dangerous criminal alone in a prison? Would Ophelia, seemingly a trained prison counsellor, be so affected by Hamlet’s actions that she would commit suicide? These are the kind of problems that must be countered by the director when developing such a strong framing device for the plot.

However other elements of the production work extremely well. There are some innovative directorial ideas – including a very good staging of the ghost appearing to Hamlet, which used light and dark to impressive effect in creating a startling appearance of the apparition. The fight scenes, including the boxing match that replaces the fencing in the final scene, were superbly choreographed and gave off the genuine impression that people were getting seriously hurt.

Credit must go to Josh Jeffries for the choreography and the well-judged nature that injected a level of truth into them. These were not gentlemanly RSC fights, they felt like the kind of underhand brawling that people would need to employ in prison. The scene, an addition to welcome the audience back to the second half, of Horatio jumped by Rosencrantz and Guildenstern was horribly realistic and kick-started the post-interval scenes with a violent explosion of energy.

Chris York’s and Nathen Whitfield’s Rosencrantz and Guildenstern were excellent throughout and a highpoint of the production. Purists may have an issue with a rather radical interpretation of their role and relationship with Hamlet. However in many ways it resolves the always problematic element of their motivation by placing them far more clearly in the pocket of Claudius. York’s Rosencrantz is the wiser of the two – the sort of thug that needles away until a chink appears in the armour, however far more terrifying is Whitfield’s psychopathic Guildenstern who appears to possess the kind of thousand-yard stare that bores directly into the soul and is just one twitch away from a rampage.

One of the real joys of this production lies in the background detail. Hamlet’s motley crew provide some well-timed comic relief and a licence to ad-lib. This helped bring the language into the modern and provide some 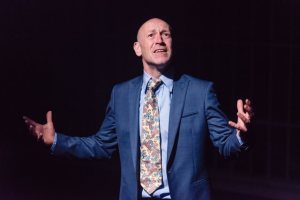 context to the more arcane sections of the text. If at times the exuberant nature of the situation occasionally led to one ad-lib to many (and I certainly think that if Shakespeare wanted ‘fucking’ written into Ophelia’s monologue then he may have written it in himself) it is likely that this will become tighter and more restrained as the run continues.

The problems appear in the second half. So much work appears to have gone into creating a vibrant, energetic and interesting beginning that less attention has been given to the resolution. Initially scenes burst onto the stage and action passes at a breakneck rate, after the interval momentum slowly grinds to a halt and direction descends to a point where actors stand still and deliver dialogue to each other for minutes at a time.

The low point is reached during the final scene when the death of Gertrude occurs without anyone on stage or in the audience appearing to notice she is dead or what had happened. The problem may rest with an imbalance of time spent in rehearsal on the two halves, as with a high concept setting it is important to establish your premise early but this natural inclination may have led to less attention being paid to the end.

And it is because that your attention brings to drift that the question marks over various inconsistencies in meshing the plot to the high-concept structure begin to assert themselves. For instance it is unclear why Claudius and his wife are allowed to walk freely around the prison, and even why Hamlet is behind bars in the first place is unexplained. The reason why he is allowed to stage a play, in prison, entirely for the benefit of his uncle and mother is perhaps something best left to dramatic licence.

These are not minor criticisms because it cannot be countered by saying that it makes it more accessible to its target audience. Whilst some people may be bored by a traditional staging, they also are not stupid and such narrative inconsistency is hardly fair on Shakespeare whose ends up on the poster.

As the run continues some of these issues will be resolved in the continuing refinement of the production. The question of whether it entirely works as a conceit is more problematic. In the end the play as a whole makes sense – remarkably considering the cuts and how scenes have been blended together –but there will remain question marks over the internal logic that it sets itself.

However the bigger question is whether it engages people in Shakespeare and challenges the preconceived notions that some people have around his work. If it does this then the smaller questions can be ignored because ultimately the production can be seen to work on its own terms.

One thought on “Hamlet”