The extent to which I was totally blown away by Christopher Brett Bailey’s performance of This is how we die last autumn can be seen in his appearance alongside Mark Strong and Tim Piggott-Smith in Civilian Theatre’s annual end-of-year awards bonanza. Indeed his blistering quick, laceratingly acerbic but impressively managed style was enough to edge out Simon Russell Beale’s King Lear for a place on the Best Actor shortlist. It also holds the distinction – along with Trevor Nunn’s glorious production of Anything Goes, Kneehigh’s Cymbeline and an amateur production of Dürrenmatt The Visit – of being one of only a very small number of productions I have seen twice.

The following review is taken from the Autumn 2014 performance at the Battersea Arts Centre. On reflection my opinion remains the same. It is a highly impressive work. The writing feels like it has been tightened slightly and the performance style has gained a little more subtlety (although I do feel it suffers from such an intense, fast, loud beginning that it does struggle at times to provide enough variation in tone). Bailey has the measure of the text and has peppered the text with language that provokes seeming incongruities. There is a delightful play on mouse and mouth that suckers the audience into thinking that Bailey has slipped on his material but in fact is an entirely knowing absurdist thread to a poem. Seeing it a second time does provide an opportunity to allow some of the imagery to wash over you rather than frantically trying to keep up with the rapid fire delivery. I would highly recommend that fans of the show think about a return trip.

At the end of Christopher Brett Bailey’s performance of This is how we die the audience are subjected to – and it is a case of being subjected to rather than being passive observers of – a sonic assault that is best imagined as the sound of an imploding, decaying universe and the tentative hope that something new and beautiful can rise from the fading flickering light. The stage lights turn their impassive bulbs on the audience, bathing the 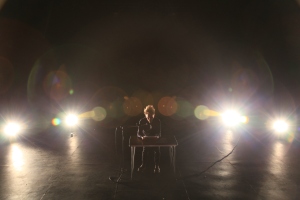 observers in a harsh, unforgiving light whilst ear-shattering, fuzzy rhythms rise and fall, roll and repeat, looping and overlaying motifs amongst discordant sounds. It is the white-noise of paranoia and of an overwhelmingly claustrophobic hopelessness. And then suddenly, within this kaleidoscope of fear, emerges the purity of higher-pitched strings, cutting through the chaos and providing the possibility of escape.

This antagonistic ending, this attritional warfare waged between performer and observer is only eight minutes long but it could easily have been eighty. It is a wonderfully considered reflection and response to the sixty minutes that come before, and adds to the impression that Christopher Brett Bailey has talents and intelligence far beyond being a highly articulate performer blessed with startling verbal dexterity.

Having not previously heard of Bailey, and without looking at the show’s synopsis, I hadn’t really considered what to expect. Whatever I might have expected wouldn’t have come close to the reality. This is a performance that is felt rather than seen. The audience are almost immaterial; nothing has been created for our benefit. The stagecraft is defiantly un-staged. It is a man at a desk, talking, talking and continuing to talk, from notes, for sixty minutes, without stopping, almost without breathing, he continues to talk, to himself, to the walls, to the room, whether the audience is in the room or not, it feels as if he would continue to talk, possibly until all words had become exhausted.

It leaves you in a state of mental and physical exhaustion. Listening to the dialogue, focusing on the words is mentally draining, but there is also palpable tension, as a result of a deliberately abrasive delivery style, that creates an adrenalin rush so intense that by the end of performance you leave the auditorium woozy, unsteady and in need of air.

Bailey arrives as an unassuming, almost diffident presence – perhaps the only hint of what is to come is the resemblance to a young David Lynch – but as soon as he begins he exerts a magnetism that pulls in whatever direction the flight of fancy will take him. He is a remarkably assured performer and is blessed with a lyrical nimbleness that allows what, are assumed to be, tightly crafted pieces the air of stream-of-consciousness dialogue.

However we are a long way from the acid-fried, whacked-out performance poets of the beats. There are no long pauses lazily inserted to give banal phrases the air of cosmic significance. No room to allow the audience time to think and reflect. This is performance poetry that reflects the speed of modern society. It is urgent, repetitive, and confrontational. Like any prose poetry performed by a young, white hipster in the 21stcentury, it has been shaped, consciously or unconsciously, by hip-hop’s emergence at the end of the 20th. It also feels influenced by the unselfconscious chatter of club kids, eyeballs rolling, bombs of MDMA consumed, and the state of the world unravelling in front of their saucer-sized pupils.

In his notes Bailey namechecks Lenny Bruce, George Carlin and William Burroughs. Listening to the flow other reference points emerge and fade. There are definite echoes of Thomas Pynchon in the way that everyday

scenes bleed into a psychedelic dreamscape – a land where reality continues to exist even as the images becoming increasingly surreal. This is most apparent in the standout piece which describes a trip to this girlfriend’s parents that starts off lucidly but eventually blends into caustically described grotesques of a swastika-shaped father and a mother with her mouth stapled shut.

Brett Easton Ellis also comes to mind as Bailey maintains a detached reference point to the scenes he is describing. It doesn’t have Easton Ellis’ obsession with the ennui of the rich and the beautiful but much is said with the same cool archness that Ellis gives to the Bateman’s. As a result it gives the feel that Bailey is one-step removed the events he is describing and taking a position of both narrator and commentator to the action.

However it is worth noting that Bailey is not just a brilliant synthesiser of other people’s styles. He has his own voice and, more importantly, he has his own mind. If the delivery is excellent then the dialogue, in the main, is equally impressive. This is not just a man with a thesaurus showcasing his skills; there is clear method and rigour within the surrealist imagery. It may be impenetrable but there is logic and reason to the journey that Bailey takes – and it is this discipline and clarity that ultimately separates him from the second-year students who worship at the altar of Bukowski, torn copy of Fear and Loathing in Las Vegas blue-tacked to the walls, scrawling indecipherable phrases after a particularly intense mushroom session.

As Bailey performed it became impossible not to drag up the name of William Faulkner’s famous stream-of-consciousness novel to describe the assault on audience – this is ‘the sound and the fury’, but is it also, as Faulkner implies, and Shakespeare states, ‘a tale told by an idiot…signifying nothing’?

Well Bailey is a very long way away from being an idiot and the highest compliment to pay this remarkable performance is to quote Faulkner’s final words of The Sound and the Fury; how did the audience respond to the show? ‘They endured’.

Please note that the majority of this review was written from Christopher Brett Bailey’s performances at the Battersea Arts Centre in Autumn 2014.

2 thoughts on “This is how we die”