Richard III, as proved by his miraculous reappearance in a car park in Leicester, is someone who will not stay dead. In the last three years we had already seen three major productions, including turns from the cream of both stage and screen; Mark Rylance and Kevin Spacey. It is a brave performer who follows in those footsteps and even braver one who takes it despite minimal recent stage experience and a screen persona that has been fine-tuned to be the polar opposite of the larger-than-life, charismatic king. 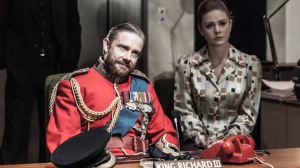 demographic without destroying the vitality of Shakespeare’s language.

Richard III, and last year’s superb Macbeth with James McAvoy, blurs the lines between cinematic and theatrical expectations. It is reasonable to quibble with the handling of the language but it is wrong to deny they contain a thrilling visceral energy that may counter the preconceived notions of those whose only experience of theatre is via how drama is taught in schools.

There has been criticism in how Martin Freeman approached the text and it is true the verse of the famous opening monologue is all but destroyed through his delivery. However this is less marked in the rest of the play and often the iambic meter is fluid and complete. He may not have the rounded tones of a natural stage actor but this may be a combination of lack of experience and also the directorial decisions underpinning the play.

The decision to tackle ‘Now is the winter of our discontent…’ in that way would not have been taken lightly and, on balance, the production gets away with it because it is being delivered as an address to the nation. If we accept the opening premise that changes it from a traditional monologue to a public speech then it is logically justifiable to deliver it in the clipped rhetorical tones of a politician rather than in the fluid verse of someone expressing their inner-thoughts.

Whilst changing the tone of one of Shakespeare’s greatest speeches is controversial, it does allow a wonderful moment that would not otherwise be delivered. To use the language of cinema there is a brilliant smash-cut at ‘But I, that am not shaped for sportive tricks’; Freeman’s Richard switches instantly from the exterior to the interior, from the public to the private. We see clearly the calculating nature of his public persona and the private contempt of others. 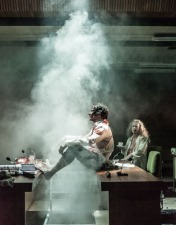 For an audience less literate in the convoluted back story of the play it also makes it easier to recognise the inappropriateness of the good humour he shows to Clarence as he is being sent to the tower. We have already been shown the duplicity of Richard and his ability to – use the jargon of modern politics in which it is set – ‘work the room’. Here with Clarence we witness this as a fine art; understanding, consoling and, naturally, mastering the double-speak that contains no lies – ‘well, your imprisonment shall not be long’.

If this Richard has one overriding trait it is that of the small-man syndrome writ on a national scale. This is most clearly witnessed in the wooing of Lady Anne; a scene that demonstrates both the driving force of this Richard, along with a sense of what makes the production ultimately problematic.

The scene between Richard and Lady Anne contains some of Shakespeare’s greatest interchanges but the nature of the argument makes it difficult to pull-off. The idea, to a modern audience, that Anne could be moved by Richard’s logic can seem incredible. We must be convinced that Richard has this animal magnetism, this charisma, about him, or at the least that amidst all the cold logic of the argument there is a fear of the consequences of rejection that causes Anne to act the way she does.

The scene ends with a brilliant gesture that tells the audience everything about the petty-mindedness of the character. Rather than delivering ‘Was ever woman in this humour woo’d / Was ever woman in this humour won?’ to the audience, Freeman very deliberately delivers it to the corpse of King Henry. This is a very clearly a man who takes pride in settling scores and has obsessional focus on proving that his deformity is no limit to action.

What Freeman brings to the role, in contrast to Spacey’s version at the Old Vic, is a focus on the minutiae of the character. Whereas as Spacey enveloped the stage with his Richard and presented him with an overwhelming 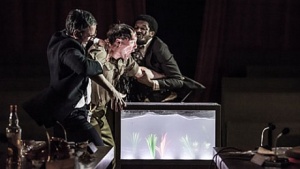 charisma, Freeman instead looks to bring Richard alive through the small gestures. It is a sensible move and borrows from the skills that honed through The Office and, more recently, in his superb characterisation of Lester Nygart in Fargo.

Martin Freeman is the master of the pause, the half-beat or the perplexed stare. These all make an appearance and it necessarily impacts on the delivery of Shakespeare’s verse as it corrupts the rhythm. However mostly it is for good effect and Lloyd is clearly looking to wring all the black humour he can out of the production.

In a Richard who is a superb manipulator of people, we see those pauses, those stares be used to create a silence into which others will speak only to seal their fate. It is in keeping with Richard’s character’s that he should ask, not in anger but perplexed, ‘I pray you all, tell me what they deserve / That do conspire my death with devilish plots…’ and then leave a pause for Hastings’ to fill with his own death sentence.

Overall this is an interesting, enjoyable but flawed production. There are some excellent touches from Lloyd, including the introduction of a quite brilliant and extremely chilling on-stage murder of Lady Anne which is absent from Shakespeare’s play but more than justified in the staging. Freeman gives us a Richard that within the context of himself is a fully-rounded character, however it does not quite bare scrutiny when considering the wider world of the play. For all of the small touches, Freeman cannot bring the necessary charisma to the role and it never seems likely that this Richard could bend so many to his will in order to achieve the power he craves.

Read what others think:

The Other Bridge Project

One thought on “Richard III”