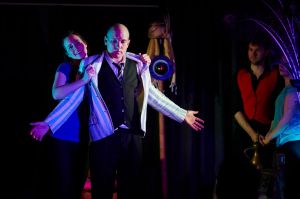 * ‘The Abduction from the Seraglio harem health spa’

Just as some people judge the arrival of spring by their first sighting of the swallow, Civilian Theatre – rather less inclined to nature – can say with some confidence that if it finds itself crammed into a most unusual location, wineglass wedged between its knees with a soprano hammering away at Top C just a few feet away then it can only mean one thing – Spring and the first show of Pop-Up Opera’s touring season.

A promising first encounter came courtesy of Bizet’s Le Docteur Miracle in Drink, Shop & Do, and the feeling that Pop-Up Opera were a company not to be missed came with a fabulously insouciant Cosi fan Tutte in a Mayfair bar. And as a result I find myself in the stylish surroundings of Robert Kime’s furniture shop for one of Mozart’s lesser known opera’s ‘The Abduction from the Seraglio’.

It is typical of the company that a lot of effort is expended to make a relatively obscure piece of music accessible to those who do not often find themselves frequenting opera houses. Purists may splutter at the idea of a classical piece being updated to include references to big brother, donkey kong and tinder but it is important that this doesn’t come at the expense of the music. 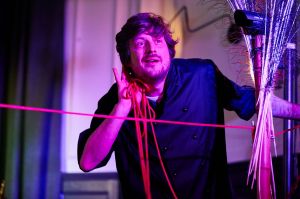 Pop-up Opera’s style is to leave the music to itself and pepper surtitle screens with mostly irreverent commentary. The comedy mainly hits the mark and provides an accessible and modern interpretation of the action that broadly follows the plot but which also recognises that humour occasionally needs to be updated if it will appeal to a modern audience.

For instance it may have been the case the antics of Belmonte and Pedrillo in rescuing their future brides would have been a source of great hilarity to 18th century audiences but it is entirely reasonable to expect those watching 300 years later to prefer to have a few modern touchpoints to reference. These cues are rarely overbearing and function like a traditional synopsis so you rarely feel torn between watching the stage and reading the screen.

The Abduction… is a rather curiously structured opera. The first half is almost entirely structured as individual arias and so it can take quite a while to warm up to. As the piece is scored to a single electronic piano there is a risk that it can become a little repetitive, and there is definitely the sense that – musically – it takes a little while to get going.

Konstanze – Eve Daniell – has two substantial arias in the first half, and it is only by the second one that the production really begins to hit its stride. Daniell was terrific as a Fiordiligi in Cosi fan Tutte, and she is equally impressive here and demonstrates a hugely impressively vocal dexterity through the famously complex “Martern aller Arten” aria.

Whilst the first half is peppered with arias that showcase the skill of individual performers, it is really only with the meeting of all four of the lovers that the opera really takes it off. Once united there 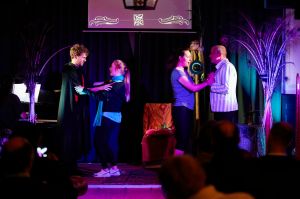 are a number of excellent duets and quartets that open the piece out musically and provides a much greater degree of richness and complexity.

Berrak Dyer, credited as musical director and pianist on press night, should also be mentioned. The skill in coaxing such a subtlety of sound out of an electronic instrument is not to be underestimated, and while there were times when a fuller sound would have been preferred – particularly in creating the lush, ‘Turkish’ elements – Dyer works incredibly hard to give every note a purpose and in these intimate surroundings one can sense that the singers are responding to that.

If The Abduction from the Seraglio is not quite as impressive as Cosi fan Tutte that is perhaps the inevitable result of it being a much earlier and less complete work. However given that it is staged only infrequently and is performed with a great deal of panache and charm, it is hard not to recommend Pop-Up Opera’s latest production.

3 thoughts on “The Abduction from the Seraglio”