Fast-paced and full of vitality, Teatro de los Andes’ production finds new energy for a play whose radicalness has become blunted by its well-worn familiarity. In the fore-knowledge of its famous quotations and its prototype of the tragic hero, it is telling that it has taken a non-English language company to develop a radical approach that plays with both text and content. In recent years its closest parallel on the English stage has been Thomas Ostermeier’s German production but whereas Ostermeier’s production seems to revel in its willfully abstruse nature, the direction and purpose of Teatro de los Andes is clear throughout. 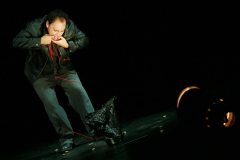 There is nothing deliberately complicated about this production. It may be performed in Bolivian with just three actors and a musician. It may have taken a hatchet to the text, rewriting most of the dialogue and weaving altered quotations throughout, cut half the characters and reduced the length to under two hours.

However it also provides a chillingly clear indictment of the politico-military instability that ripped apart Bolivian society throughout the latter-half of the 20th century, which is told through the lens of the paranoia and madness that infects not just Hamlet but the whole household.

Writing in the Guardian, ahead of the publication of The Hamlet Doctrine, Simon Critchley and Jamieson Webster argue that we have either forgotten or misunderstood the true nature of Hamlet and that productions too often focus on safe interpretations; they argue that we should look to the likes of Lacan and Nietzche who took analysis of Hamlet’s character beyond the basic Freudian Oedipal model, and offered far more radical implications for society.

This production demonstrates a fault of Critchley and Webster’s argument, and of many recent audience-friendly versions of the play, which is that it continually focuses Hamlet the play on Hamlet the man. They clearly understand the motivation that affects Hamlet as an individual but ignore the idea that Hamlet is a free agent, and that he operates in a political world full of other free agents; each with their own motivation that exist independently of Hamlet’s actions.

This political world was created with stunning effect in the recent National version, which contained towering central performances from Patrick Malahide and Rory Kinnear and that showed the rotten state as one of a modern paranoid surveillance culture. However, as strong as the production was, its lens remained resolutely focused on the impact that this state had on Hamlet.

The difference in Hamlet de los Andes is the recognition that Shakespeare created a cast full of rounded characters; each with their own narratives, history and relationships with other characters. The power and size of Hamlet’s role makes it easy to forget that there is a whole play full of characters that need to be brought to life.

Perhaps this possibility can only be seen when stripping back the text and working out how to stage the production with such a small cast but the result is transformative and truly radical; in particular the decision to elevate Ophelia to a character of equal importance as Hamlet.

The most famous reinterpretation of Ophelia is probably Heiner Muller’s post-modernist Hamlet Machine but, unlike Muller, Teatro de los Andes does not try to fundamentally alter Ophelia’s nature; instead they create a duality in Ophelia where she becomes her own character but also acts as a cipher for the women who are too often the unheard voices during phases of political instability.

This is particularly true within the context of Latin American military juntas where sexual violence was one of the tools used by the state to create a state of oppressive fear among the unradicalised and where, in Argentina, the Mothers of the Plaza de Mayo became such an important element of the airing the stories of the disappeared.

In Shakespeare’s Hamlet, Ophelia is ridiculed by the ‘tragic hero’ and is used as a tool of her father, Polonius, before ultimately being driven to madness and suicide. In this version Ophelia is both this and a representation of the suffering of all women under military rule. Her silence reflects on the lack of voice given to women, but also adds a dignity that starkly contrasts with the childish acting out of Hamlet under his assumed madness.

This interpretation is a moment of brilliance and shines new light on an old play. It reminds us that Shakespeare was a consummate storyteller but that there is nothing wrong with companies revisiting the material to build new narratives that fit with the modern world.

This production fizzes with inventiveness both in its interpretation and in its staging. This is a physical production that showcases Teatro de los Andes’ talent for creating memorably tableaus. The set is bare apart from a table with a hinged top so that it can double as a door; the height of simplicity yet through the power of suggestion it leads to extraordinarily vivid imagery.

A brilliant scene presents the fracturing of Hamlet’s personality under the stresses of the environment through the simple notion of three identically-dressed actors creating a hallucinatory effect of multiple-personalities. The

emergence of Hamlet’s ghost is another example of simple techniques working the best – the use of dry ice and backlighting creating a classic stage illusion that fools the audience into believing a puppet’s head belongs to a live actor.

As the play continues there is a real sense that it is spinning out of control; actors begin to step out of role, forget the characters they are playing and lose sense of the actions. Its suggestion is that the play is widening its focus to show us the madness of the state alongside the madness of the man.

The crescendo starts to build with the graveyard scene. Rather than reflecting on aspects of mortality, it becomes an absurdist delight drenched in poignancy; closer to Stoppard’s Rosencrantz and Guildenstern… than to Shakespeare’s Hamlet. The characters argue and bicker because they cannot seem to exit the grave; they are wedged in tight, forgotten about and seemingly thrown in without a second thought many times over the years.

Again the audience is brought back to the stark reality of a country that suffered under these repressive techniques; this is reinforced by the most powerful of all the interpretative elements within the production – ending the play on ‘and the rest is silence’. This is an incredibly bold move and in a lesser production potentially seen as disastrously arrogant. Here it is dramatically justified and a reminder that the tragedy that lies in these post-military democracies that have never sought to confront their past.

‘The rest is silence’ is painfully true for the many who will never have answers of what happened to loved ones, who will never know if they suffered the same fate as Ophelia and for whom justice is rarely seen for the elites.

It is unfortunate that there appears to be so little space and appetite in Britain to create such radical interpretations or find the space to showcase the work of others. Is Hamlet in Bolivian a tough sell? Well yes but this three night run in the Barbican Pit has been sold out for months. For those that made it a truly innovative and radical show was the reward, and one can only hope that this is not the last we have seen of the quite remarkable Teatro de los Andes.