Theatre Uncut will be in Brighton, Bristol, Canterbury and Liverpool in December 2014. For more details and to book tickets check out Theatre Uncut’s website

The Theatre Uncut project is now four years old. That is four years of coalition cuts, four years of the retrenchment of public services and four years where the quiet desperation of those without a voice has remained largely unheard. In that time Theatre Uncut has expanded so that it has now been performed in 17 countries across 4 continents. It has also started its first national tour and this year, through online polling and through a workshop process, writers chose to focus on the topic; ‘Knowledge is power, knowledge is change’. 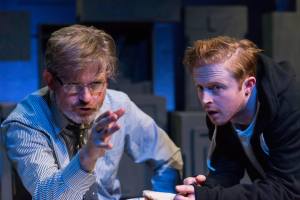 One of the most interesting aspects of the process is finding out how five different writers decided to interpret the statement and how they decided to engage with the overtly political process of writing under these conditions.

Perhaps most surprisingly, and most refreshingly, is that a number of the plays focus on the personal more than the political. There was a balance that helped stop the gnawing sense that the whole programme was little more of an anguished wail of the liberal left against a coalition government that (like it or not) had every right to govern and who had been tasked with reducing a sky-rocketing debit burden following the global economic meltdown.

The variety on display meant it avoided the sense of lecture and the evening was leavened by a remarkable versatility in the well-judged humour throughout. It starts off in a blackly comic tone with ‘The Finger Of God’, which could easily have slid out of Charlie Brooker’s Black Mirror-inflected fevered imagination. It takes a classically dystopian near-future world where the lottery is seeking to ramp up interest in its games due to falling public demand. On one hand we get a rather obvious satire of the powerful slowly ramping up the consequences of playing but on the other we get a more nuanced look at those who continue to play the game even when it is so clearly rigged.

It is a good start to the evening and makes a point that resonates both with people who put the blame on those who make the game and also those who put the blame of those who play it. It is also worth noting that, with excellent timing, the superb ‘Last Week Tonight with John Oliver’ ran a 15-minute segment covering exactly the same issues in November. If you thought the satire was a little terrifying then check out the reality:

Pachamama, Clara Brennan’s piece, was the most oblique of the five. It was close to free verse and contained a dazzling array of surreal images that hung together with the faintest threads of coherence before falling away as fragments of ideas. Eventually all became clear and whilst I struggled to align it with the central brief, it was a sparky piece that suggested an attempt to find a through line from personal experience to pan-global universalism.

Reset Everything, by Inua Ellams, is a sprightly and wry take on the extreme measures that people find themselves in when up against the faceless wall of bureaucracy. Over the five pieces it is the most overtly comic and arrives shaped like a 1950’s farce despite tackling very modern problems.  It comes stocked with recognisable characters and situations, including a new-age guru and a twist on the ‘lover hiding in the closet’ trope.

On the surface Reset Everything is a play about the personal but it becomes increasingly evident that the personal has been fundamentally shaped by the political. Even when it is not being directly talked about, the political looms over these plays, darkening the lightness that emerges. 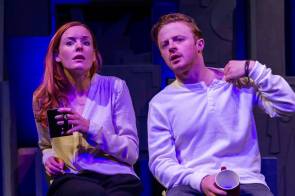 Vivienne Franzmann’s The Most Horrific was the most successful of the plays by some margin. It felt the most coherent and existed as a complete work in its own right. Some of the others felt

like sketches or fragments of a larger play but, like a good short story, The Most Horrific felt like the only length it should have been.

It also – perhaps coincidentally, perhaps not – contained the clearest passion. It retained a focus on the personal and was less focused on the UK political scene than some of the others but had a burning fury about the public’s disengagement from issues that stray outside their narrowly defined parameters.

This was wonderfully shown in the split narrative structure which divided between a comic getting feedback on their failing stand-up routine and a middle-class couple watching the news. The dissonance between the failure of the act and the hypocrisy of the middle class who preach virtue in public and in private demonstrate a prurient interest in the most salacious details was hugely powerful.

In Franzmann’s work the phrase ‘knowledge is power, knowledge is change’ sounds like bitter irony because these people have access to more knowledge at their fingertips than any other generation in history but yet , faced with it, they chose to retrench into a high-brow version of the gossip columns.

For those who want more on this then check out Adam Curtis’ Oh Dearism short film, which is a stunning representation of how we have ended up disengaging with the modern media.

The actors themselves are excellent and handle the shifting tones and moods superbly. Particular credit goes to the two female actors, Faith Alabi and Ruth Gibson. Alabi is first-rate and terribly moving as the comic in The Most Horrific, while Gibson moves seamlessly into different roles – great as, what I took to be, Mother Earth in Pachamama and just horribly persuasive as the all-too-common middle-class hypocrite in The Most Horrific.

One slight criticism is that I feel that Theatre Uncut spends too much time preaching to the converted. It may get out to audiences who don’t normally engage in theatre but I didn’t feel that any of the pieces stepped outside the comfort zone of the liberal left. The biggest issue, particularly in an election year, is the rise and rise of UKIP (and to some extent also the meteoric rise of the SNP) but there is very little here that seeks to address the reason why the traditional working class are abandoning mainstream political parties in droves – and whether or not that is a good thing.

In relation to UKIP many of the political classes – mainly on the left, but also some on the right, have cited the core issue as being one of a lack of awareness – a remarkably patronising attitude that only fuels the disconnect – which, if true, makes it a topic that seems perfectly suited to this subject

That quibble aside Theatre Uncut is a powerful night out and it is invigorating to see these issues addressed on stage. The practical nature of turning around short plays so quickly does mean there is an unevenness among them, but that is part of the charm and you would feel slightly let-down if they had the glossy polish of a West End production. This is makeshift theatre that feels like it has grown out of the philosophy of the Occupy movement and is all the better for it.