The Secret Agent – Theatre O @ the Young Vic, until 21 September

Note: This review was a preview performance

London in September; leaves begin to turn autumnal brown and regular theatre-goers, who have shunned the opportunity to join the annual pilgrimage north of the border to experience rents higher even that those for a 1-bed

shoebox in Clapham and a population densisty that rivals Waterloo Bridge at 11:59 on New Year’s Eve, settle in for one of the more interesting months in the London theatrical calendar.

September is the month for quietly baking in one studio space after another as London’s theatres take their chances of the pick of the fringe, and companies from across the country set out their stall and make their pitch for the hearts of audiences and the wallets of producers.

Working out of the Maria Room at the Young Vic, Theatre O have certainly snagged a prized piece of theatrical real-estate. Despite it being the first night of previews a bustling atmosphere is in evidence, which is testament to the anticipation of Theatre O’s return after five years away and to the strides made in both the Young Vic’s innovative programming and muscular promotion over the last few years.

The mixture of highly inventive company and classic novel with modern resonance is a potentially intoxicating blend. Theatre O take a high-concept, extremely physical approach to staging the play – not exactly a rarity amongst the Fringe where naturalism tends to push budgets to the limit, but all too infrequently seen in London since the likes of Berkoff and Bond have been pushed into the shadows. Edinburgh is increasingly a refreshing anecdote to the depressing move towards a process-heavy, formulaic approach to the development of new writing that is affecting London’s major fringe venues.

Theatre O’s production highlights the best and worst of physical theatre. There are moments when actors and actions synchronise and time appears to slow down to a point of transcendent stillness. Theatre O’s use of an expressionist style enables them to capture the physical manifestation of a character’s emotion and then focus on it with such a relentless intensity that the world appears to have shrunk around it and all that remains is a tableau of emotion frozen forever in time.

Beautiful imagery flickers amongst the unfolding tragedy of the narrative; the quarter-turn of audience and the slightest shrug of the shoulders as Mr Verlock struggles to comprehend his wife’s emotions to the news about Stevie encapsulate everything that one needs to know about Verlock the man and Verlock the husband. It is in these brief moments when the pieces interlock to form a harmonious whole that the full potency of physical theatre in action can be witnessed. 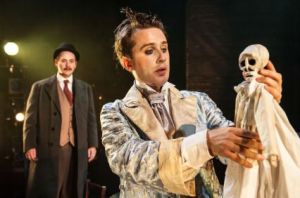 There is a wonderful scene that sees Stevie – played by Leander Deeny, who steals the show in an inspired comic performance as the Russian embassy officer, Mr Vladimir – recreate an experience of a hansom ride. It is a reminder of the power that theatre has to cause a suspension of disbelief despite being surrounded by the instruments that tell you it is false. Mr Deeny invests so much of his being into the effect of transforming household furniture into the very essence of a horse that, despite the crude mechanics, one cannot help be transported to the period.

Sadly these moments are punctuated, and increasingly so as the production continues, by a lack of coherence and the sense that every idea in Theatre O’s box of tricks has been shoehorned into the concept. If the production could have focused more intently on creativity that worked with, rather than in competition to, its expressionist theme then it would have avoided being left with a production that has four or five really strong moments but which is then undermined by a stream of incoherent, unformed ideas that drag the audience away from the power of Conrad’s original story.

The Secret Agent opens with a wonderfully striking visual and then showcases a textbook example of how to transition between scenes without needing to pause for blackouts. In fact Theatre O can lay a strong claim to have created the best opening twenty minutes of theatre that will be seen this year. And then the audience participation begins…

It just feels so stilted. Talk to the audience of course – think of the Young Vic’s version great town hall scene in Enemy of the People earlier in the year – but don’t involve them. Humour is drawn out but the pace of the play is cut in half. The faffing of people getting in and out of their seats; for those wrapped in the play’s internal logic it is a blow from which it never truly recovers.

As the play continues there is increasingly the sense that this is a curate’s egg of a production. There are definite longueurs and Theatre O never seem entirely comfortable with the challenge of exposition; the problems of transposing the denseness of Conrad’s writing and the skewed chronology that frames the novel are never properly resolved and the production sags in the middle third through long-winded and stilted duologues between characters that do little more than explain what it is happening in the plot.

Ultimately Theatre O’s The Secret Agent is rather like a precociously-talented but under-achieving nephew; one is continually charmed and cannot help be impressed by the explosion of creativity on display but ultimately it is a slightly wearying experience that leads to a feeling that if just a little more focus could be applied then the potential for great things await.