Whether you would enjoy An Oak Tree might be best based on the response you’d give on learning that the play is named after a Michael Craig-Martin artwork in which an artist asks the viewer to suppose a glass of water has become a tree, and that Crouch is someone who described theatre as ‘a conceptual artform. It doesn’t need sets, costumes and props, but exists inside an audience’s head’.

There will be many who find the 70-min play – where Crouch performs opposite an actor who he meets an hour before and arrives on stage not having seen the script, or knowing anything about the play – exactly the kind of pretentious garbage that justifies the swingeing cuts currently being delivered to the Arts Council. However those who see in theatre a medium naturally open to the world of almost infinite possibility will surely be invigorated by this revival of an early work from one of the most formally inventive writers of the 21st century.

In recent years we have seen the flowering of a new generation of playwrights, with few ties to the in-yer-face dramatists of the 1990s. Nick Payne, Lucy Prebble and Lucy Kirkwood have burst onto the scene with superbly delicate plays that balance strong writing with inventive design and narrative trickery. Yet for all their skill none have come close to Crouch’s assault on the nature of theatre. 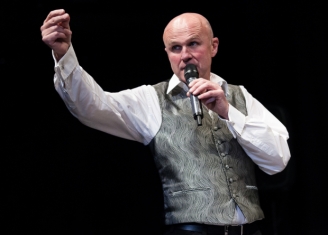 Coming in under the radar, Adler & Gibb – his most high profile play to date – was a shock to the system and a welcome reminder that there are still people willing to use theatre as a means to interrogate itself. It was infuriating, brilliant and radical. Exactly what theatre ought to be.

An Oak Tree may be a simpler proposition but it remains an audacious work. It forces the audience to consider what a play is. Have we paid to see something that is a dramatic exercise of an actor performing with a text they have never seen, or have we come to see the play itself? On stage, we do not just see the story but rather the whole mechanics of performing a play. We see Tim Crouch, the director, talk the actor through the character and the situation before the ‘story’ as we understand it begins.

Throughout there is a constant dialogue between the multiple layers of story-telling on display. The nominal plot sees the actor perform their role in the story as instructed, yet there is also a lower level form of story-telling as Crouch plays the part of a hypnotist. This creates a further complexity, as the nature of hypnotism is to question the idea of truth and reality, and is reliant on the idea of falsity in performance. Throughout the play we are made aware we are watching an actor be a character, and then this falsity is refracted through the ultimate sense of puppetry – that of the hypnotist and their subject.

On top of the more traditional narrative, there is also a further dialogue occurring between the actor and director. The actor and Crouch have short scenes that appear to be Crouch checking

whether the actor is comfortable with what is going on. They appear natural and unscripted, but yet they form part of what the actor is instructed to say. They are telling us how they are feeling, but it is not what they are feeling but rather they are performing the dialogue. Alongside this is a final story that is hidden from the paying audience; Crouch breaks the action but remains on stage talking through a mike directly into the actor’s headphones. We cannot hear what is being said and instead create our own narrative to fit what we are watching.

Now this would be all be meta-theatrical game-playing if it isn’t for the fact that Crouch has fashioned it around a piece of raw drama. The story within the play concerns a man who is trying to come to terms with the loss of his daughter. The loss of a child is one of the oldest narratives, and its resonance remains no matter how much Crouch subverts the traditionally linear approach to story-telling.

In this performance, the man is played by a woman (Maggie Service). No attempt is made to hide the fact she is woman, but there comes a time that, despite the game playing, the sensitivity of Crouch’s writing makes us believe that she is who we are told she must be. It as if the audience are proving a hypothesis that Crouch was trying to test – that no matter how transparent the artifice of theatre is, it is still a medium that can transport us to disbelieve reality.

It is a fascinating theatrical experiment, which is all the more appealing for Tim Crouch’s mild-mannered nature. He could not be further from the popular held perception of the conceptual artist; all pompous, self-aggrandisement and a permanent position in Pseuds Corner. One wouldn’t be surprised to discover he was a secondary school English teacher, and developed the play as a way of getting pupils to engage in drama.

This isn’t to underestimate Crouch. He deserves to be thought of as one of most exciting British dramatists in recent years, and can be held up against the likes of Pirandello, and also more contemporary reference points, such as the great American postmodernist, Paul Auster.

An Oak Tree is a welcome revival of a play that is not afraid to challenge its audience, but never seeks to lecture them. It never assumes an implicit level of knowledge from those who watch it but has confidence that its approach will take people with it. It introduces complex positions on the nature of story-telling but never at the expense of the play’s emotional heart or by taking away people’s ability to connect with it. In the end it is a triumph of complex simplicity.

2 thoughts on “An Oak Tree”