In Fleabag, Phoebe Waller-Bridge has created a terrifying portrait of a person who embodies two of the major movements in modern society; the continuing reverberations of the feminist movement running headlong into society’s obsession with individualism and self-actualisation. It is of a person whose self-involved narcissism and belief in the right to be free to control one’s life-choices blinds them to any impact their actions may have on others. Fleabag continually rejects culpability for the paths she takes and even refines poor decisions into positive self-affirming actions. Fleabag is a 21st century manifestation of the id, rampant and uncontrolled.

It is also the funniest play that has hit London this year.

Rare is the playwright that truly captures the language of real life and turns it into something dramatically interesting. I have regularly extolled the virtues of Nick Payne for his skill in crafting modern, believable dialogue for his

characters; Waller-Bridge shares this talent whilst going further to infuse it with a poetic, heightened language that is rooted in the everyday.

It is startling to be confronted by a modern text that so positively drips with a love for sonorous language but yet doesn’t strive to root itself in the past. Every line feels written by someone with a deep respect for classical theatre but who understands that respect is best shown by not looking backwards and instead immersing yourself in the culture that surrounds you.

Monologues are as pure a form of theatre as it gets for writers and performers; there is no hiding place, the production rests and falls on the skill of the actor and the quality of language. Waller-Bridge spent a fair proportion of her last production, Mydidae, naked on stage so is better placed than most to quibble about the nature of exposure but Fleabag contains a ruthless emotional honesty that is shockingly, brutally, exposing.

Mydidae explored how removing our physical covering makes it easier to create a passage to the emotional core, whereas Fleabag removes all pretence and from its first moments delves into the deepest crevices of the mind of an independent, assured modern woman and probes it for cracks in the surface; the vulnerabilities that face all woman in an age of supposed liberation – political, economic, social and above all else, sexual.

For this is a monologue that is steeped in the current dialogues surrounding feminism and what it means to the generation that did not have to fight for it. It is here that Fleabag demonstrates the elements that have seen it be championed as one of the picks of the Edinburgh Fringe. It studiously avoids the polemics and instead displays its arguments through subtle highlighting of how hard-won equality under the law is still being undermined by socio-cultural norms.

Waller-Bridge’s Fleabag is a monster – a ravenous sexual entity that seemingly cannot discriminate between friend and conquest, desire and lust, attraction and obsession – but constantly the audience is reminded of how this may be viewed if the person delivering the monologue was a man.

The player/slut debate that Fleabag circles has been around for years and may seem like a hoary old trope but that doesn’t make it any less valid a reference point. A generation of woman have been brought up to believe that the battle has been won but changing the law does not lead to changing lives. The Twitter trolls and the campaigns over the increased use of sexualised imagery on the front covers of lads mags has shown that skirmishes continue.

Waller-Bridge’s Fleabag uses her body as a tool for her own personal gratification and talks in the frankest terms of an obsessive relationship with pornography. Does this debase her or does it set her free? Has she been enslaved by a masculine-fantasy of feminist equality – the idea that freedom to choose means becoming a hedonist to pleasure – or is she is a liberated self-actualised feminist who has rejected the traditional gender values of chastity and purity placed on woman by a patriarchal society?

These are deep and important questions that the modern feminist movement is continuing to wrestle with. Whilst the language of Fleabag is graphic and profane, it treats the issues with an impressive sensitivity and widens the debate further by picking at the oft-ignored issue of whether the move, alongside the equality movements of the 1960/70’s, towards the freedom of the individual has led to a world where the collectivist-ideals of feminism have been undermined by a stronger charge towards rampant individualism.

This can be seen in the cool dismissal of the traditional feminist lecture, paid for by her father (a neat and resonant touch in a week where it was revealed that Femen was originally bankrolled by a rich Ukranian man), where ‘four hundred women stare at the two of us, horrified / We are bad feminists’. Why? Because they would shave five years off their life for the perfect body.  Here the collective ideal is seen to be undermined by an individual’s belief that attractiveness is a value in its own right.

Phoebe Waller-Bridge is a remarkable performer. In Mydidae she demonstrated a superb languid naturalism; her portrayal of Marion contained a truth that appeared routed in reality and the inability to separate character from performer created an emotional intensity to a play that deliberately grounded itself in the mundane.

An hour-long monologue tests even Waller-Bridge to the limits but there is no doubting the impressiveness of the performance, which led to the being awarded the Fringe First Award and the The Stage’s Best Sole Performer. It is probably impossible to do full justice to the text if Waller-Bridge wasn’t directly responsible for it. She inhabits Fleabag with a preciseness that can only come out of fully understanding where the character has been drawn from.

Waller-Bridge has a beguiling presence on what is an empty but intimate stage at Soho Theatre; in many ways she reminds us of the legendary raconteurs who frequented the kind of clubs and pubs that made Soho famous. For 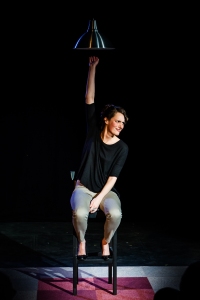 Fleabag’s life is a story that needs telling, often with tangential asides, usually with an acerbic put-down and always with an insouciance that masks deeper vulnerabilities. Waller-Bridge’s talent is in making this incredibly narcissistic personality someone who you begin to root for; someone whose unshakable confidence is a thin veneer for a fragile personality on the verge of cracking.

She is also incredibly funny. The script is packed full of one-liners and phrases that are outrageous enough to elicit gasps from the audience – including, whilst talking about taking pornographic selfies, a memorable description  that culminates in ‘it looked like someone had dropped a little bap on the floor of a hairdressers’. And if you need more context then you will just have to head to Soho Theatre to find out more.

How funny is Fleabag? Naturally nothing drains life out of humour more than explaining it but ask any member of the audience what rubbers on pencils are for and you will get your answer.

Some may find Fleabag to be too in your face, to obviously a product of hipster-London and ironic self-detachment – and a guinea-pig themed café is pushing the boundaries pretty close – but this is to take people as they appear and not as they are. What makes Fleabag so monstrous is the fact that it is no grotesque caricature, but that the grotesque is one element of a fully rounded psychologically flawed modern anti-heroine.

Fleabag continues the impressive development of Phoebe Waller-Bridge into an actor of real presence and unusual talent. Her striking features and willowy figure are filled with a self-possession that is reminiscent of Rebecca Hall’s exceptional turn as Sylvia Tietjens in Parade’s End; very much a Fleabag for the early 20th century. It is not hard to imagine Waller-Bridge following a similar trajectory to Hall – with TV and cinema on the not too distant horizon. One hopes that theatre does not lose her too soon.

Fleabag’s run at the Soho Theatre is approaching sell-out. The nature of its creation means that it may never satisfactorily be revived – although one suspects that drama students will doubtless be attempting  precisely that for years to come – so grab a ticket now to experience a unique, intimate and hilarious encounter by an actress who will be performing much more prestigious venues sooner rather than later.

One thought on “Fleabag”