The Merchant of Venice – Almeida Theatre, until 14 February 2015

There are few directors who have the ability to divide audiences as much as Rupert Goold. It has become standard for his reinterpretations to brim with ideas and display an exuberance that can irk

traditionalists as much as they excite those who believe a play to be a living text.

His production of The Merchant of Venice, reaching the Almeida after a season in Stratford, does more than most to alienate, and even his most fervent supporters reach the interval trying to grasp at the point of transferring the play from renaissance Venice to 20th century Las Vegas.

We must consider the play one of Shakespeare’s most problematic. Any director must think through how it can be staged effectively and it is a cop-out to provide a traditional setting in order to avoid the context that the modern world brings to how we must approach Shylock and his humiliation. It is clear what may have been acceptable for Elizabethan audiences will not play as well to the modern theatre goer.

As much as Shakespearian scholars can claim there is more to the interpretation of Venetian Jewry than may be initially apparent, it is hard to avoid the grubbiness with which he portrays Shylock debasement and Jessica’s elopement with Lorenzo. As much as we can argue that art should live in a vacuum it is impossible to watch the play without holding an awareness of what has happened in the 20th century.

It is also a structurally difficult play that ends entirely peculiarly. It is, technically, a comedy but it fails to fulfil many of the rules that we might associate with Elizabethan comedies. It doesn’t end in a wedding and rather than finishing with the duke bringing order to the chaos, it ends with Gratiano, a lower character, making a rather inelegant ribald remark about his betrothed.

Well Goold makes the decision to turn the play on its head, and leaves us with an ending so bleak, so suggestive of storm clouds gathering, that if not quite being equal to the great tragedies it is at least worthy of an HBO series.

As the final curtain descends we are left with three couples who, in destroying Shylock, have destroyed themselves. The audience are left with Bassanio’s question to Shylock, ‘Do all men kill the things they do not love?’ [IV.i] to mull over. In their single-minded pursuit of what they thought they desired they have ultimately left themselves a future built on lies and deceit. The warning on Portia’s caskets that ‘who chooseth me shall get as much as he deserves‘ returns to us with a startling relevance.

Goold’s great skill is to see how the essence of the play can be distilled into one simple gesture. Ten minutes into the second half he provides a moment when we can understand exactly what he has been driving at all along, what his vision is and why he made the decision to set it in Las Vegas. And it is simple, almost innocuous; Bassanio, dressed as Hercules, choosing the casket that will win him his love’s hand, and Portia, relieved and weary, removing her wig. Portia the prize has finally become Portia the human.

She has her love and she imagines that for her the role play can be over. Yet the audience knows better; we know that Bassanio, playing Hercules to her demi-

god, can remove his costume but if he breaks the fantasy then he must also admit that the ‘wealthy Lord’ was just another costume. For this is Las Vegas; a city where nothing is at it seems, Elvis is not Elvis, and everyone is playing a role.

It is an inspirational piece of relocation by Goold. America is a city where everyone can start afresh, and Vegas – a city built from nothing in the middle of a desert – is the spiritual home to the shared illusion that anyone can be a winner.

So it is that Portia’s casket – a curiously unreal plot device even when Shakespeare wrote the play – can be updated to form part of a modern gameshow. To an audience who may have watched a reality show where gullible contestants honestly thought they were going to date Prince Harry, does it really seem so strange that a women could be married to a person who opened the right box?

It is Shylock who suffers most in Goold’s reinterpretation; never entirely fitting neatly into the new world. Yet Goold finds an ingenious way of highlighting that Shylock is always aware of his position, and the suggestion is that he has tried to fit in to society despite being aware of his otherness, and the fact that he does not, as he tells Bassanio, ‘eat with you, drink with you, nor pray with you’ [I.iii]. This recognition is brought into stark relief at the end of the first half when McDiarmid’s Shylock removes his wig and from then embraces his heritage by the wearing of a yarmulke.

Shylock henceforth rejects the role he has been playing, that of bowing and scraping outsider hoping to retain his religion in the face of taunts, and instead takes on a new role – the role that they expect him to play; the Jew that their barely veiled anti-Semitism want him to be.

Roles proliferate; Lorenzo and Jessica elope as Batman and Robin. A typical Goold touch, it both enables a very modern pun on Jessica’s ‘Cupid himself would blush / To see me thus transformed to a boy.’ [II.vii] whilst also suggesting that here in Vegas, Batman and Robin are the thieves stealing from the evil Shylock.

The final major act of role playing is of course Portia and Nerissa’s transition into a lawyer and clerk. It is this that serves to free Antonio – the one character who remains unmasked throughout – but leads to ultimately damning all of those in this continuously changing masquerade.

The damnation comes as a result of the action reaching such a fever pitch, whipped into such frenzy by the stage action, that Portia crosses the boundary from which a modern audience can never forgive her. Until this point the audience as seen her as the unfortunate rich airhead trapped as the prize to a host of suitors. Susannah Fielding is superb at flitting between the airhead that matches everyone’s expectation; a doll whose eyes light up when the audience starts to applaud but who possesses a rare intelligence and who sits far above the abject suitors who cannot decode the riddle.

However as she realises she has the solution to the puzzle she cannot retain her poise; she joins the others in ridiculing Shylock, in mimicking him in the most crass ways. Prior to this we recognised Portia as someone who is separate from us, even above us, but we pitied rather than judged her. Suddenly we realise that her sense that ‘the quality of mercy is not strain’d,…it blesseth him that gives and him that takes’ [IV.i] is something that she feels ought to be applied to others rather than to herself. Her position as a paragon of virtue in a vicious world has been lost and can never be regained.

From this point she, and everyone, can never be allowed the happy ending that would normally be expected in a Shakespearian comedy. She is not content to let Shylock escape and she continually rejects Bassanio’s attempts to provide Shylock with the money. Just like Shylock she acts within the letter of the law and declines to show mercy, and just like Shylock she must be damned because of it.

Perhaps the only character in Goold’s production to escape complete damnation is the only one to never wear an overt mask; Antonio. Indeed he is a character so open that he doesn’t even 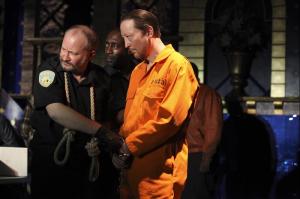 bother to veil his anti-Semitism in his opening exchange with Shylock. Yet his relationship, and his actions towards, Bassanio have always hinted towards something unwritten but perhaps acknowledged by Shakespeare. Goold has Bassanio symbolically kiss Antonio’s stomach before Shylock prepares to extract his pound of flesh, and this moment suggests that something more has been left unsaid.

Significantly it is only Antonio that is prepared to show Shylock any mercy. It is a grudging mercy, a mercy that reeks of ill-will, but perhaps it is a mercy from a man who recognises in another what it is to be an outsider, someone for whom being unmasked would not just mean humiliation but ostracism and possible death.

Goold has brilliantly found a way to frame The Merchant of Venice for a modern audience that is entirely at home with the tropes of anti-heroes, unsatisfactory endings in imperfect worlds and media that manages to reinforce and subverts our expectations of others.

There are flaws; Shylock is rather lost as the dynamics shift the play to focus on Portia, and whilst the second half is brilliant it perhaps only seems that way in the context of a first half that is a little too noisy and a little less coherent.

However when Goold is in this mood these a minor quibbles for the chance to enjoy a master craftsman at work.

One thought on “The Merchant of Venice”