Following rave reviews for Made In China’s previous work, Gym Party, and having caught the scorching This is how we die by associate dramaturg, Christopher Brett Bailey, I had already mentally 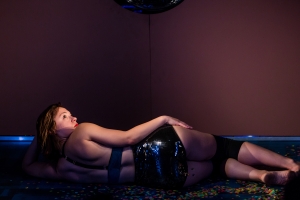 clocked the company as one to keep an eye on. Their previous work had been built on a reputation for intelligently confrontational productions powered by a strong interest in purposely playful narratives, and their latest proved to be no exception. 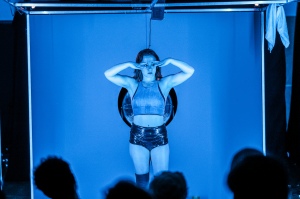 Everything exists in a state that is both real and unreal. The story is full of elements that feel absolutely grounded in truth before the threads are pulled further to give a sense of unreality. A back and forth argument between Jess and Tim, and the occasional barbed retort, do not feel plucked out of the air. Yet as it continues the ground becomes increasingly slippery underfoot. The dialogue becomes almost too real, too perfect. There is a bravura section towards the end where the narrative brilliantly changes direction to give a highly detailed account of Jess’ clothing, and we are suddenly pulled out of the moment to remember that we are only witness to selective truths.

Also operating in a curiously unreal space are the three dance sequences that punctuate the show. They remain broadly unexplained and could be there as much to create a strange, 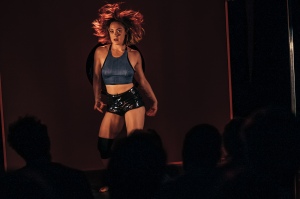 antagonistic feeling in the audience, but it feels that Made In China may be making a deeper point about female sexuality. The middle dance seems to reflect the pervasive hyper-sexualised imagery that filters through almost elements of human society, whilst the final whirling windmill of a routine appears as a grotesque representation of Nora’s Tarantella from A Doll’s House, with the boxy stage acting as Jess’ cage.

Tonight I’m Gonna Be The New Me is bold and experimental. Yet is not unique. Earlier this year I had caught the revival of Tim Crouch’s An Oak Tree at the National’s Temporary Space. They share many of the same elements, and both were written at a similar point in the maturing of the artist. Where An Oak Tree edges this work is that it delivers a more universal experience and finds a really deep level of empathy in its characters. Made In China are far more than a hipster theatre company, but there is a sense – in some of the script’s touchpoints and the slightly snarky tone – that the coolness of the offstage lives pervades something of the onstage persona. This helps ground it in a truth, but it is possibly a truth that can be self-limiting. However this is a minor point in a very impressive work that is highly recommended for those wanting to catch a rising company unafraid to keep an audience on their toes.