The Dead – Barbican Pit, until 01 February (part of the London International Mime Festival)

Città di Ebla’s The Dead, inspired by the James Joyce’s short in the collection, Dubliners, is an intriguing performance piece that eventually struggles to overcome the sense it is a composite of a number of stunning images carefully interwoven with some technical wizardry rather than cohering together as a fully-functional whole.

Performed as part of the London International Mime Festival, Città di Ebla have used Joyce’s story as a jumping off point for a wider exploration of a person’s memory and its relation to past and present. Joyce’s original is rarely referenced directly, 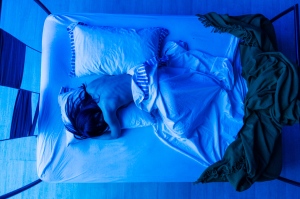 and it is hard to escape the shadow of Proust when unpicking what it is to remember, but The Dead does seem appropriate launch-pad as it delivers a universal experience to which the audience can relate.

The protagonist, performed by Valentina Bravetti, plays the nameless woman who appears to be returning to an apartment and in doing so her interactions with the surroundings trigger memories of a past love. These memories are captured live through Luca Di Fillipo’s photography and are instantly overlaid on a screen at the front of stage.

The live element of the photography changes the dynamic of what the audience are watching. On one level the difference between a slide-show of pre-recorded images and live photos is minimal; they achieve the same effect – of allowing a portal into the performer’s inner world. However understood on a second level it begins to challenge our intuitive assumptions about the nature of memory.

As these images are being created and displayed instantly it creates an implication that the past is a place where we cannot return and the act of remembering is something that happens in the present. All of our experiences are stored in the present. They cannot be stored in the past or future. So when Bravetti’s character is recalling her love is she creating a new moment in the present with her memory or is she genuinely accessing a memory of a past event? 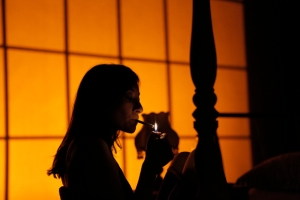 Città di Ebla plays on this sense of dislocation by deliberately creating a vague sense of time. A voiceover implies the lover was 17 when they died, which would suggest several years must have passed, whilst Bravetti appears to be picking up papers that are suggestive of a much more recent event.

A reverse reading can also be seen in the production; an exploration of how the past shapes our present. Our past experiences clearly shape our present – not just in the outcome of the choices we make but also in the way it can suddenly come alive and infect our present. As Bravetti travels through the apartment she is forced into an act of remembering by a past that is dynamic and alive. It lives on in otherwise inanimate objects. Whether she chooses to or not, the artefacts, the remnants, of that relationship are shaping her present.

These questions are not resolved, and it is not Città di Ebla’s intention to resolve them; however as a result this lack of conclusion, allied to a lack of narrative thrust, means that the piece as a whole, whilst technically very impressive, struggles to exert a grip on the audience.

The screen separating the audience from performer acts creates a certain distance that leads to problems with empathy. For the majority of the show we see the performer through the  protective screen of her memories. This is used to create some startling effects and the choreography and interaction between the two leads to some scenes that are laid out with a painterly composition that Vermeer would be proud of.

Yet it is notable that some of the most engaging and human moments of the play are when we are left alone with Bravetti and are allowed to momentary step back from the window into her soul. One yearns for more of these moments, where we are left along with the external grieving process, and we recognise the human for what it is; something, that for all the technical mastery you want to employ, where the workings of the psyche is ultimately unknowable.