It has taken Wot? No Fish!! a while to reach the Battersea Arts Centre. After spending two years in development, it premiered at last year’s Edinburgh Festival before working its way through the regional theatre circuit then finally arriving in London just as Edinburgh begins for this year’s crop of hopefuls.

Except this isn’t quite true. The story we are told pre-dates all of this by the best part of ninety years, and the show was already there just waiting to be found. For Danny Braverman has pieced together, drawing on his own 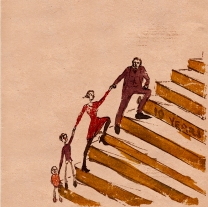 family history, a far more tender and moving story than could ever be realistically crafted in fiction: the life of an East End Jewish shoemaker and his family told through the weekly sketches he gave to his wife on the back of his wage packet.

It may be told with all the simplicity of a fairy-tale but the magic is created in the natural complexity of the lives of real people. It is a story of a family who may not have encountered witches, dragons and quests but instead must confront argumentative sisters, the threat of war and a move from the East End to Golders Green.

This is the story of Celie and Ab Soloman and we hear about their lives through Braverman whilst seeing it brought to a vivid reality through Ab’s miniaturist cartoons; it is less a play and more an illustrated aural biography. Braverman has made a wise decision to not perform the story because he has realised that all the drama exists in the pictures; he recognises his role is to explain, to be our guide through the lives of others.

The production has a few touches that hint to its past life at Edinburgh, perhaps some will find the slightly whimsical delivery irritating and the attempts to engage the audience a little heavy-handed but this is just part of the charm of a production that is constantly reinforcing a sense of community and of shared stories. 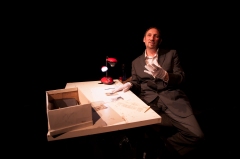 As Proust starts with a madeleine so Braverman starts with fishballs. And if you didn’t already know you were entering the close knit world of east end Jewish families then the references to gefilte fish and chrain prove something of a clue. It is the memory of this snack that accompany him on a trip through hospital and it is the recurring motif that Braverman returns in order to continue unravelling the lives of Celie and Ab over time.

Braverman acts as a curator of the work. The care with which he has unpicked and ordered the events is staggering. There are over 3000 works in total and we are shown a carefully woven selection to build a richly textured picture of two lives that we never knew existed before walking into the room. By the end of the journey (inevitably it must end and like all human journeys it can only end in one final destination) we feel we know them as well we know our own relatives.

Yet of course we don’t, we only know Braverman’s interpretation of this relatives’ story. This is a play that doesn’t only tell us about Ab and Celie, as it cannot help to also tell us something about the person telling us the story. This becomes more apparent as it progresses and Braverman finds himself entering the narrative in the final years – as the grandchild the Soloman’s never had.

He is in effect uncovering truth about his own past through rediscovering it in the remaining fragments of someone else’s life. Perhaps one criticism of the production is that it would have been nice to unpick this aspect in more detail, to really look at the role of Braverman in shaping the events he is telling us and how his own relationships with his family have shaped the tale he is telling.

However the real star of the show is Ab and his art. It is breathtaking in scope; spanning decades and artistic styles, and as a historical record of everyday people living through the 20th century it is a vital body of work. This paints a picture of the lives as they were not how they are often written; Abe and Celie were not ‘the noble poor’, ‘the huddled masses’ or ‘the great unwashed’. They were real people living real lives and making the best they could of things whilst asking for nothing in return.

You can also see his style develop over the years from the thin sketches of the 1920s to a richer, colourful palette by the time he has retired. He has an incredibly witty eye – even in the depths of tragedy he can find a lighter note to unburden Celie – and his work might well have graced Punch or Private Eye had he been an Oxbridge graduate rather than a shoemaker from Whitechapel.

There is great poignancy in this production and within its simplicity is a tale that is incredibly moving. We know where it must end but it is only as the images flick past, the children get older and the years go by that we come face to face with the inevitable fact that there can only ever be one way to finish the story.

Braverman handles this ending with great sensitivity and avoids sinking into trite sentimentality. Indeed he finds, in one of life’s great coincidences, a wonderful circularity to the story and as a result we can leave thinking that, rather than end of the book, it is just the start of a new chapter.