I would like to open this review by mentioning that Civilian Theatre does not see itself as one of those critics that takes a perverse pleasure in lacerating poor productions with a damning review; chuckling to oneself with each stab of the keyboard. In the four years of reviewing plays, Civilian Theatre has only really laid into two productions (Babel and Peter & Alice) and both were big

enough to make it unlikely that my chiding remarks would have any real impact on the sensitivities of those involved.

With smaller-scale, or up and coming, companies it usually preferable to take a more modulated tone; criticism can serve two purposes, on one hand a review is written so that a potential ticket buyer can draw something meaningful about a play whilst a theatre company may also use it to draw insight from what a person distanced from the production process took away from the evening.

So in a roundabout way, and with the previous two paragraphs forming a mea culpa for what is to follow, we reach Hamlet, usually by William Shakespeare but here pared-down to 90 minutes and subject to reworking by the English Repertory Theatre.

Now I have been a stalwart defender of the right to adapt Shakespeare in order to draw in new audiences or to cast fresh perspectives on the action. I loved both of Phyllidia Lloyd’s productions at the Donmar (Julius Caesar and Henry IV), and felt that cutting close to four hours from Henry IV Part I & Part II was entirely validated due to the way it thrillingly reinterpreting the relationship dynamics between the lead roles.

However it is a high risk approach and one has to be sure that every snip from the text is dramatically justified and lends to the clarity and purpose of the production. So in this version it is understandable that you would excise much of the political intrigue that swirls around Elsinore, cutting Fortinbras and Hamlet’s trip to England completely and narrowing the action to Hamlet’s coterie in order to fit it to the school setting.

What is less understandable is why you would then reallocate dialogue so that Horatio delivers Fortinbras’ final lines in a cod-Norwegian accent. It is a terribly misjudged comic coda for what is ostensibly a tragedy, and also acts as a strangely out-of-place addendum at odds with the key themes that have been drawn out in the cut-down text.

This is just one example of the confusion that mars a production that reeks of being cannily targeted at the school syllabus; the stripped down running time and the schoolyard setting feel  little more than a lure to entice the financially powerful student trip market. The use of a school as a framing device is never justified, and leads to far more questions than answers, so that in the end it becomes a performance that lacks narrative coherence.

The choice of what to leave in is at times baffling and undermines the pacing of the play. It starts off at a frenetic pace but then gets bogged down in the travelling players’ scene, which is left virtually intact to include the long speeches about Pyrrhus and the death of Priam. If there isn’t time for the Ghost then surely there can’t be time for a florid depiction of the Trojan War.

Equally most of the scene between Claudius and Laertes is included but the Gravedigger is excluded, and what dialogue remains is put into the mouth of Horatio (who seems to function as a convenient mouthpiece for any parts that ended up on the cutting room floor). This isn’t just about quibbling over the relative value of difference scenes, it is about an understanding of dramatic pacing and ensuring that what you leave in creates believable character arcs for the audience.

In these directorial decisions there is a question of how much you can change a play before you actually make it a different play. However perhaps a more important question that should have been asked is ‘if the play you started out with was Hamlet then how would changing it make it a better play?’

For instance it takes an awful lot of confidence to recast ‘To be or not to be…’ (probably the most famous soliloquy in drama) so that it is delivered to a physical audience. The idea that Hamlet is performing that speech rather than using it as a rhetorical device completely changes its purpose and the nature of Hamlet as a character.

Hamlet, one of drama’s greatest creations, loses almost all emotional subtlety to become just another petulant, immature teenager. Yes, Hamlet is a petulant, immature teenager, but what makes him great is the fact he is so much more than that. The reason why you don’t play ‘to be or not to be’ to an audience is because it is reflective, it is about Hamlet teasing out the philosophy of his decision-making and it isn’t about him demanding to be the centre of attention.

By playing on Hamlet’s immaturity the production is forced into a conceptual chasm from which it cannot escape; when the play is forced to shift gears as on-stage events begin to spiral out of control it is impossible to invest in what we are seeing and so what should be tragic becomes instead grotesque farce.

We have recently seen Hamlet and his chums performing Pyrrhus as if in a school play and suddenly Ophelia is mad, Polonius is dead and the rest of cast about to join them; the ending becomes increasingly farcical as Hamlet and Laertes are forced to fight around a set of school desks. Where we could be reminded of Malcolm McDowell’s day of reckoning in If, we are instead closer to the territory of St Trinians’ schoolgirls. 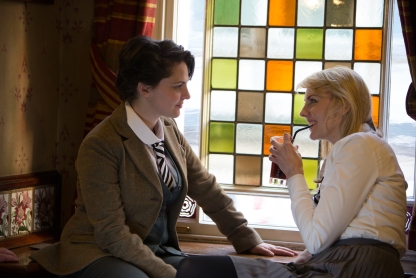 The actors are not helped by a cramped and difficult set, and often confusing staging decisions. For instance in a small intimate space it does not make sense to have dialogue that overlaps, when Hamlet meets Ophelia the scene is played simultaneously with that of Polonius and Claudius discussing them. I understand the reasoning behind the staging, and think that it could have worked, but it was done with little subtlety and all that was left was audience members having to listen to two conversations at the same time.

Equally there was often too much busyness on the stage, as if there was a lack of confidence in the text. The fantastic interplay between Hamlet and Gertrude following the death of Polonius was undermined by having the poor actor slowly crawl off the stage, seemingly solely in order to get a pay-off laugh on ‘I’ll lug the guts into the neighbouring room’. It was unnecessary and completely split the audience’s attention in a critical scene that tells us much about Hamlet’s character.

The purpose of the above was to highlight issues that shine a light on the play’s problems without going into close criticism of cast or crew. There is little point going further as the fundamental issues can be traced back to misjudged decisions made at the beginning of the process and these have fatally infected subsequent actions. Sadly the framing device is not dramatically justified, narratively coherent or well-implemented – and this means that any cast will fight a losing battle to inject meaning into their performances.

This production didn’t just make me bored, it made me damn angry. The thought that it is likely to be performed to hundreds of teenagers around the country is nothing short of a travesty. To reach teenagers, in their formative years, is to offer the chance of embedding a deep-rooted love for the possibilities of theatre into the minds of the next generation. Equally we could reconfirm every cliché about boring, difficult Shakespeare and turn them away from theatre for life. It should go without saying that I really hope that people will respond to the play more positively than I did.

A note on pricing

For all the criticisms I have listed above it is worth noting that tickets at the Cockpit are priced at a hefty £29.50 (concessions £19.50), and the same week I picked up tickets for Ivo Van Hove’s latest production at the Young Vic for £27.50. So, whilst I recognise production budgets would be of very different scales, we must also respect that a prospective audience member who knows nothing about either production should be entitled to view the outputs of both plays as being of broadly equivalent value.

In the interests of balance here are some more reviews…

The Play’s The Thing