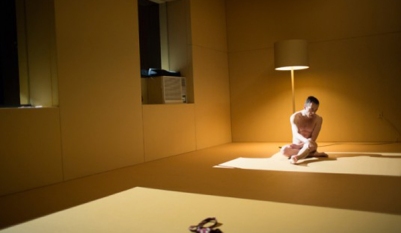 Famously Harry Houdini died not during one of his daredevil feats of escapology but due to the after effects of having been caught unawares by an abdominal punch. Twenty-four hours after seeing Song From Far Away the unexpected power from Simon Stephen’s emotionally devastating work has left me as effectively floored as a punch to the gut, and wondering when I’ll be able to regain my footing.

As a translator, I have admired Stephens’ work; The Cherry Orchard and A Doll’s House showed an impressive talent for treading a light path through the works of others. Of his own writing I had been less convinced, I found Birdland – another study of the fragile male ego – a particularly disappointing experience, whilst Three Kingdoms was as perplexing as it was brilliant.

The main draw was a chance to revisit the Ivo Van Hove / Jan Versweyveld partnership that delivered the truly wonderful, A View From The Bridge, and an Antigone; a production that suffered due to the inevitable failure to match the incredible heights set by his previous work. Van Hove and Versweyveld bring the stark, minimal approach that has brought them so much recent success. In a monologue there are fewer options for a director but one can feel the hand of Van Hove in Eelco Smits numbingly superb performance. All extraneous movements have been taken out, action is simplified and becomes mere gesture. Scenes change by a tilt of a head, and a new tone in the voice. Versweyveld’s set naturally echoes this minimalism. It is functional and representative of the rooms that Smits’ Willem finds himself in.

However the brilliance of this play rests in Stephens’ writing and Smits’ performance. It is a very long time since I have seen writing that captures truth so precisely. The evening is a gruelling experience, leavened with only the most mordant humour and sardonic observations, and Stephens’ has surely purposefully chosen a slightly unsympathetic lead character in order to make the impact of the monologue more powerful.

It becomes clear as Willem reveals more (both within the text and on the stage) that he is going through a severe mental health crisis. The trigger of this seems to be his brother’s unexpected death but the relations with his family and his ex-boyfriend suggest that there are deeper issues at root. At the core of this play, Stephens’ is bringing to life one of the silent crises of the Western world – the damaging impact of man’s emotional inarticulacy on his own wellbeing, and the damage caused by a failure to openly communicate in a world that places an ever greater premium on emotional openness.

Willem’s journey is very real and exists outside of conventional narratives. He is a white, wealthy, European man. On any scale he is among the luckiest and most privileged groups to be alive. It would be easy to challenge the purpose of this play, and ask why his story deserves to be told when so many other voices are silenced? Perhaps it’s because suicide rates among men are at their highest in a decade, and they are more than three times more likely to commit suicide than women. Or that men, as they enter the period jokingly called ‘mid-life crisis’ (45-59), they are more likely to commit suicide than at any other time.

Ultimately the reasons are immaterial. It is playwright’s right to tell the story that they wish to tell. Stephens’ has found his character and he breathes life into him. As a result it is up to the audience as to whether they wish to engage with it. Personally I struggle to see how Willem’s plight is not worthy of our time, and reflecting on Song From Far Away I keep coming back to Portia’s great speech in The Merchant of Venice; “The quality of mercy is not strained, / It droppeth as the gentle rain from heaven / Upon the place beneath”. Mercy, or in this instance – compassion, is not something that can be forced; it can only be given willingly. Willem does not obviously deserve our compassion (in the words of his sister, he could be seen as ‘a fucking prick’) but yet who are we not give it to him?

Stephens’ writing is so acutely accurate, and it always remains so enclosed within its character’s perspective, that it becomes a very masculine play and there is a question mark whether it would resonate with women quite as much. I think the emotional power would remain in place but possibly it would be harder to recognise the truthfulness from the outside. However what is very clear is that despite the fact we are hardly short of male playwrights writing male characters, watching Song From Far Away makes it obvious how few of them are even close to getting it right.

Song From Far Away is not particularly dramatic, and is often resolutely lacking in theatricality, but it contains once of the most perfectly naturalistic, tragic characters rendered in the most heartbreaking, truthful detail I have seen on stage in several years. Devastatingly brutal but undeniably brilliant.