There is no way, easy or otherwise, to describe Tim Crouch’s latest play, Adler & Gibb, so that it makes sense to the reader. Despite seeing more than 100 plays over the last three years I cannot recall another production that feels so elusive that I am left suggesting that the only way to understand it is to experience it. As a play it is defiantly high-concept, deliberately infuriating and fully aware of the challenge it makes of its audience. Having roundly trashed Mr Burns for pretty much identical reasons it suddenly becomes apparent how fine the margins between success and failure really are. 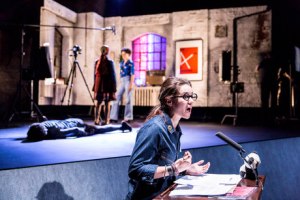 Not only is it difficult to describe, it is hard even to talk about it in a way that doesn’t make it sound like the most appallingly self-indulgent piece of pretentious, beard-stroking metropolitan claptrap. If it sounds to readers that I damning Adler & Gibb with this review then I can only echo Shakespeare’s Mark Anthony eulogy and the dubious claim that he comes ‘[… ] to bury Caesar, not to praise him’.

Tim Crouch does not tend to make plays with easy answers. In Adler & Gibb he has made a play without easy questions. Like a magician he lays subtle clues with one hand – a neat reference to the Maine lion that gives a hint to the identity of the actor – whilst at the same time misdirecting with the other – the changing story behind the napkin.

Yet the crucial factor is that despite arriving at the interval with a general sense of befuddlement and feeling close to displeasure at the opaqueness of the first half, Crouch has still built an atmosphere of trust; that this a play worth persisting with. It has an intangible quality that nags away at the back of the mind that you are on cusp of something quite special, and that if does fail then at least it will fail spectacularly.

To start at the beginning; the play opens with a presentation from a student about Adler & Gibb. She is eager, passionate and delightfully gauche; instantly recognisable as someone who has been inspired but lacks the articulacy and the knowledge to present her views as we might expect. She tells us the story of Adler and Gibb but through it is digressive, fractured and jarringly myopic. 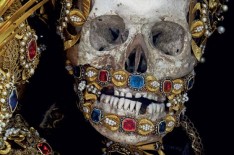 To start with the actors, or ‘the actors’; we see two people on stage, a man and a woman in their underwear, they seem to be representing Adler and Gibb, but we know Adler and Gibb were women. They stand still, facing the audience, they speak to one another but they don’t move or interact, there are pauses for sound effects. They could be representing the slides from the student’s lectures, or they could be a high-concept art work in their own right.

So it goes, the characters are dressed, and information seeps in to build a context, a story. They are an actor and her coach. They have gone to Adler and Gibb’s home. She is playing Adler in the film. Yet it is still, dialogue is stilted, the set is bare; everything has a representational quality. They are clearly actors on a stage and no effort is made to mask this fact. The backstage is visible. Children act as stage hands, bring props and costume and become parts of scenes. There is certain surrealist quality to the action, and a giant lobster is used as a prop. Should we think this a nod to Dali? Are we still in the world of high-concept art and how much of the narrative should we trust as truth?

In the second half there is a huge tonal shift in the play and it is this that sheds light on both the story we are following on stage and the meta-dialogue that Crouch is having with the audience. The play abandons its stilted nature of delivery. The stage begins to fill with props and scenes emerge. The actors have become characters. There is a scene at graveside that deliberately apes Hamlet and plays on both characters and the audiences’ awareness of the unwritten rules of theatre.

Then just as we feel we are getting our bearings there is a rapid, second tonal shift and suddenly we are in the world of film. The actor appears as a grotesque parody of the indulged, Hollywood stereotype. If it was a film it wouldn’t quite by a throwback to the lurid, pulpy b-movies of the 70’s but instead one of the neo-pulp films that deliberately references its past but then plays with convention, it has the gothic wooziness of Lee Daniel’s magnificent failure, The Paperboy.

The name Adler seems to become increasingly significant. Of all the names Crouch could have chosen and he has selected the name of the most famous method acting coach of them all, Stella Adler. We are given a speech that is in essence an explanation of naturalistic acting; a description of Stanislavski’s objective wants and desires. Are we watching a story about a conceptual artist or are watching a story about the actor inhabiting the persona of a conceptual artist? Whose story are we hearing – the slightly mundane reality as told by the real Gibb, the breathless reconstruction told by the student or the heightened-reality Hollywood version told by the actor?

Crouch is posing the age old conundrum about truth in art and questions whether it matters if the story changes to become the one we want to hear rather than the reality we are told about. However he also explores the 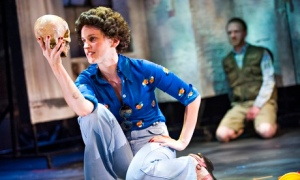 medium of the message, and how the narrative is shaped by its delivery. Our understanding of the Adler & Gibb story is shaped by the format it takes, be it conceptual art, presentation, theatre or film.

This is bold theatre-making that seeks to work on many levels simultaneously. It risks everything in the extent to which it asks the audience to take a journey without allowing them a sense of the destination.  That so many stayed the course is testament to the superbly crafted work by Crouch (alongside co-directors Andy Smith and Karl James), operating somewhere in the register of art-house, intellectual thriller (except none of those terms really apply), and the top-drawer performances from the cast.

Denise Gough, as the actor, deserves special mention for a quite exceptional performance that surely marks her out as one to watch. It is incredibly difficult to play high-octane, drug-taking assurance on stage but she has a controlled magnetism, and portrays a mania that always remains compelling without falling into pastiche.

Even without the mixed reviews it has received elsewhere, it should go without saying that Adler & Gibb isn’t for everyone. However if you like theatre that makes demands of the audience and seeks to achieve something more than A to B storytelling then I cannot recommend Adler & Gibb highly enough. I can’t guarantee you’ll like it but I can guarantee you will be challenged to understand why you don’t like it.

5 thoughts on “Adler and Gibb”