Sitting inside a stiflingly hot and airless bar-cum-theatre at the Battersea Arts Centre watching the emerging ANTLER theatre company dressed head-to-toe in arctic-ready furs it was hard to resist summoning up that most over-used of precious theatrical clichés; performers that suffer for their art. Despite unbuttoning my shirt to a level that would certainly raise eyebrows at the Royal Opera House I couldn’t help but think that on this occasion the audience had got it relatively easy.

Visiting an Edinburgh preview show is always a refreshing experience. So often going to the theatre carries the expectation of seeing a product in its finished form, and it is pleasant to be occasionally reminded of the process that goes 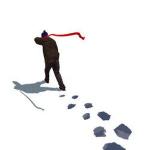 into getting to that stage. This is particularly true of a show like Where the White Stops, which has the feel of a piece that has been born out of collaborative improvisation. ANTLER, founded last year, is a young company and they retain a freshness of ideas that is an invigorating contrast to the staid conservatism of much of the West End.

Their production of Where the White Stops balances a sense of surrealist whimsy with a faintly disorientating emotional depth that gives rise to the slightly strange feeling of being trapped inside Bjork’s superb video for Wanderlust. They employ a mixture of physical theatre and polyphonic singing to create a vividly original vision of a fantastical frozen world.

If at times the whimsy can veer uncomfortably close the more navel gazing elements of The Mighty Boosh then it is not long before ANTLER bring it back on course through a tightly written narrative arc that suggests that below the improvisational, physical surface is a keen sense of the importance of the traditional story.

The story is of the modern fairytale; a heroine going on a journey to discover the world, and within it, herself. The key to the freshness of these stories – understood by everyone from Suzanne Collin’s Hunger Games trilogy to Hayao Miyazaki’s work at Studio Ghibli, and in particular Spirited Away – is in the development of a carefully designed world where flights of fancy can be accommodated within the dreamlike logic of the set-up.