Oh, the Humanity and Other Good Intentions – Tabard Theatre, until 20 September 2014 (tickets)

Will Eno has been nominated for a Pulitzer Prize, Lynn Gardener called him a ‘supreme monologist’ and was described in the New York Times as ‘Samuel Beckett for the Jon Stewart generation’. On the back of ‘Oh, the Humanity…’ I must admit to being utterly mystified by any of these facts.

Comprising of a series of monologues and duologues, Oh, the Humanity is primarily a display in the type of vacuous, meaningless pretension that you would be disappointed to see from a student in the first year of a creative 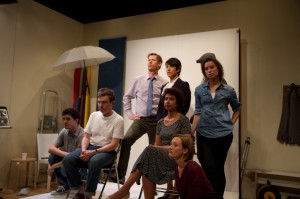 writing course, let alone an award-winning playwright. It is supremely self-indulgent, remarkably irritating and, for a play that is clearly interested in the fragile connections that exist between people, stunningly lacking in self-awareness.

It is difficult to not feel sorry for the actors – more than one of whom looked genuinely uncomfortable as they delivered lines that fell flat against the stony silence of the audience. One can imagine that discomfort that comes from having to play a semi-comic supremely insensitive PR Rep for an airline company that has just seen one of its planes go down in flames. If timing is everything in comedy then this has butted rather too uncomfortably against reality.

I had really wanted to like this production if for no other reason than because I wish End of Moving Walkway every success. Whilst not a habitual attendee on the fringe-scene, I appreciate anyone willing to challenge the existing iniquitous model where access to performing is limited to those with the deepest pockets. End of Moving Walkway have taken the brave step of guaranteeing actors at least minimum wage for rehearsal and performance. It may not be a lot but it is better than expecting actors to exist on a wing and a prayer, and for this the company deserve praise.

One can see the logic of choosing Oh, the Humanity as a first play. A series of monologues means that you can keep rehearsals to a minimum and staging relatively simple. However this has been a year of sensational monologues, and whilst this may have heightened awareness in the form it has also set the bar very high. We have had terrific performances from Fiona Shaw, Juliet Stevenson and Lisa Dwan early in the year. There was Kevin Spacey chewing up the stage in Clarence Darrow and Danny Braverman’s low-key but potent Wot! No Fish? Even now it is up against The Me Plays and, more pertinently, Neil LaBute’s Autobahn.

I have always struggled to like Neil LaBute plays but one has to admire them; his control over his writing, his use of language and the way that words become recurring motifs lead to powerful and impressive work. He is able to grab the audience and hold them in his sway no matter how distasteful the subject. In comparison Will Eno’s work is flabby in content and flaccid in power. In thrall to his own brilliance, he lets his monologues go on and on. Oh, the Humanity clocks in at over 90 minutes for five pieces and does nothing to justify holding the audience’s attention.