The pull quote for The Telegraph’s review for Edna Walsh’s Ballyturk is simply ‘hard to fathom’ – well, they got right. Twice I have been pulled into the Lyttelton for a Cillian Murphy / Edna Walsh collaboration and twice I have left frustrated with the outcome. The high points have remained the same and they lie in the wonderful sets created by Jamie Vartan and in the virtuoso performances by the cast. 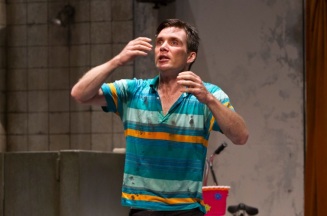 In Misterman, Vartan turned the Lyttelton’s stage into a cavernous warehouse that seemed to stretch endlessly into the distance, whilst Murphy was magnificent in a performance of spectacular energy and verbal dexterity. My main reservation was the play seemed to operate under the illusion that it was a far more complex than it really was. The ending, presented as a big reveal, was something that could be seen a mile away.

Well in Ballyturk, Vartan creates another ingenious set and Murphy gives another high-energy performance. This time he is joined by Mikel Murfi, who is given every chance to showcase the benefits of a Jacques Le Coq schooling as he is jumps nimbly into the shoes of an entire Irish village’s worth of characters, and also by Stephen Rea, playing a languid, louche Stephen Rea-character.

The cast are all excellent in what they are asked to do. There are issues with the clarity of their speeches but this feels more of a studied directorial decision to give the play a frenetic feel in order to keep the audience off-balance at all times. Played on the edge of mania it is exhausting just to watch; The sudden explosions of music, the high-octane performances, the rapid fire dialogue, the conversational tics and character changes ensures that the 90 minutes is a mental strain.