Fraulein Julie – Barbican, until 04 May

Strindberg’s Miss Julie never seems to quite fall out of fashion but even by its standards, London has been awash with the play. This is the third major version in less than a year, and it has been only six months since audiences at the Barbican were left underwhelmed by the high-profile casting of art-house favourite Juliette Binoche in the title role, whilst those who saw Mies Julie were rather more  thrilled by the South African reinvention and the Young Vic took it upon themselves to revive Patrick Marber’s After Miss Julie.

For all the different qualities these productions brought to Strindberg’s original they must be regarded to be drifting in the wake of Katie Mitchell’s exceptional production, which contains a lacerating truthfulness that 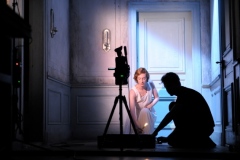 makes it almost unbearable to watch. The most remarkable element of the exposure of the truth in this most naturalistic of plays is that Mitchell’s deliberately subverts audience expectations of naturalism by introducing many layers of artifice in order to produce a dislocating, alienating experience.

Fraulein Julie contains all of the directorial tics of a Katie Mitchell production; television cameras are used almost continuously alongside the action, a set creates physical barriers between audience and actors, sound booths overlay conversation and Foley artists provide live sounds effects. The audience are left in the position of watching both the back of a TV studio at the same time as watching a radical reinvention of the Strindberg play – and yet despite all this feel no dissonance as the events unfold.

These traits in Mitchell seem appropriate – in so far as there are auteurs in theatre, it is hard to imagine many British directors fitting the bill better. Her natural reference points seem to be from Russian cinema – with the slightly woozy quality of Sokurov’s The Sun and its obsessive focus on Hirohito being particularly reminiscent in the utter focuus on one character even as events of more dramatic significance happen external to the action. .

It is not that Mitchell has a filmic quality to her work but that she has the auteur’s passion for pursing a singular vision with seemingly little regard for the enjoyment of the audience. It expresses a confidence in her own belief, and that if the belief is proved correct then the audience will be taken with her. Fraulein Julie is an experience and rarely a particularly pleasant one; it is draining, august and defiant in its lack of concession to those watching. It seems a rare person who can increase the level of austerity attached to Strindberg but this is what Mitchell has achieved.

A day after performance it is still impossible to attach a sense of how ‘good’ it was – even in tragedy there is usually a way to qualify enjoyment, be it through plot, character or performance. Here the plot is stripped away to focus entirely on one character, but the character is provided with very little interior life and the performances themselves are muted through their heightened naturalism.

However there is something about the whole affair that is undoubtedly brilliant and possibly makes it the most genuinely ground-breaking production of the year. In Mitchell’s previous work there has been an attempt to force her ideas onto plays that are not best suited to the technique. With Fraulein Julie, Mitchell has found the content to harmonise with form.