Last week I had the somewhat dubious pleasure of sampling two musicals. One is a scathing social satire on contemporary values whereas the other is a gruesome tale of revenge that ends in a bloodbath for all concerned. One is a complex work that draws on recurring classical motifs whilst the other takes a magpie approach to the classic styles of twentieth century musicals. One is regarded as one of the great musicals by a legend in his field. The other has been championed by Lorraine Kelly. But are we letting reputations get ahead of us?

In the interests of fairness, Civilian Theatre has assessed the merits of both shows to see whether Sweeney Todd: The Demon Barber of Fleet Street, the perennially popular Stephen Sondheim musical that won rave reviews at the Chichester Festival last year and has since transferred to the West End, is really any better than WAG! The Musical, which was enjoying its world premiere at the Ye Olde Rose and Crown in Walthamstow. 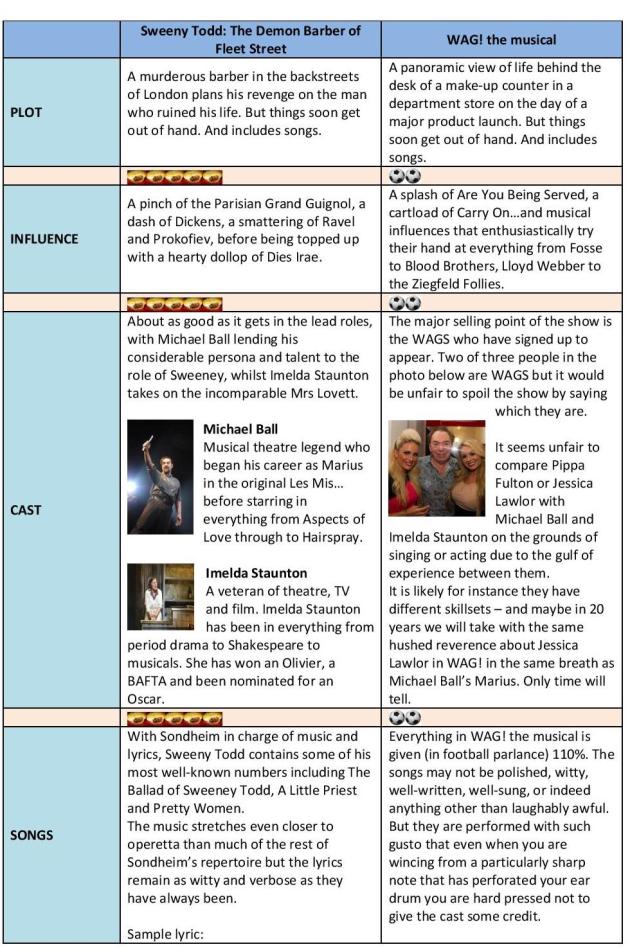 So there you have it, a win for the WAGS. The colossus of Broadway has been brought to his knees by some upstart wives of footballers. As any sportsman knows – the stats don’t lie. WAG! the musical has proved itself every inch the equal of Sweeney Todd and Sondheim (lyricist for West Side Story, Academy Award Winner, Pulitzer Prize Winner, Winner of 8 Tony’s, 8 Grammy’s and 6 Olivier Awards and with a theatre named after him) clearly has been humbled by a new challenger for the crown.

Editors Note: Apologies to Mr Sondheim for the misspelt Sweeney in the above article. If I hadn’t been moved close to despair by uploading gremlins then the amendment would have been made.