The Cripple of Inishmaan – Noel Coward Theatre, until 31 August (some tickets available)

It is the website that gives it away. Alight on Michael Grandage Company and it is all too clear that this play is less about the ‘Company’ and very much about a certain Daniel Radcliffe. This is not in itself a criticism of Michael Grandage or Daniel Radcliffe. One must swallow the bitter pill of realism when it comes to the financial dynamics of the West End, which is, if you want to stage a play like The Cripple of Inishmaan for 12 weeks in one of the larger theatres of the West End then you must have an ace up your sleeve to get the audiences in.

Daniel Radcliffe is quite an ace, and paired with Martin McDonagh – notably of In Brugges and, rather less notably, Seven Psychopaths fame – the evening is set for quite a potent mix. The problem is that at times it feels that Michael Grandage has been so keen to find an edgy, modern play to entice a young actor looking to mould his career that he has failed to notice that he has chosen one of McDonagh’s weakest plays.

In Brugges had some incredibly dark scenes but was leavened by its acute sense of place and the fish-out-of-water verbal sparring of its two leads. The Lieutenant of Inishmore looks for black comedy and manages to eventually locate it in something the colour of pitch; a breathtakingly offensive yet hilarious play about the troubles of an Irish torturer considered too mad for the IRA.

McDonagh’s first play – The Beauty Queen of Leeane – won four Tony Awards and has a plot that marvellously manages to deceive its audience at every turn. It is rightly revered as a near-classic and a stunning achievement from the then-25 year old. Unfortunately the Young Vic revived it in a celebrated production less than two years ago and there are certainly no Radcliffe-shaped parts in it. 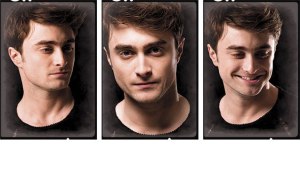 The Cripple of Inishmaan is not a bad play and it follows McDonagh’s other plays in exploring an Ireland that seems to exist out of time. Eventually it can be placed temporally in the mid-1930’s but realistically it could be anytime from 1780 to 1980. On these rural islands the sense is that life continues much as it has always done; roles are fixed and nicknames determine character rather than other way. The arrival of the film crew on a nearby island is the jolt that throws the island off its axis – it acts as the classic outsider who engenders change on the local and drives the actions of the play.

Daniel Radcliffe plays Cripplebilly – a young man cursed with a limp and a name that he cannot shake. He sees the arrival of a film crew as his chance off the island and Hollywood as a place where his disability can be, if not accepted, at least overlooked.

It is another undeniably smart decision in the post-Potter career for Radcliffe. He deserves a great deal of credit for tackling Equus – a difficult play and a difficult part – and so far he has broadly eschewed the Hollywood-fodder that would seem so tempting. The lead in a reasonably intelligent The Women In Black and acting alongside Jon Hamm in ‘A Young Doctor’s Notebook’ on Sky Arts are the only real mainstream exposure he has received in a post-Potter universe. If the adaptation of Bulgakov’s short stories was a bit of a mixed bag it still represents a remarkably leftfield step for someone with the choice of pretty much any script.

One thought on “Radcliffe crippled by burden of expectation”