A rather unusual thing happened to David Grieg whilst he was researching material for The Events (winner of a Fringe First, subject to rave reviews and currently playing at the Young Vic until November); following a feature interview in The Observer he was forced into the position of an issuing a statement via his blog to clarify that his latest work was both not a musical and not about Anders Breivik.

It is a telling moment in the creation of this subtle and quietly devastating work that one of our leading contemporary playwrights felt the need to publically justify his work; it was a moment that was indicative of the undercurrent of sensationalism that surrounds mass public tragedies and which makes it so difficult to discuss them in anything other than the most binary of terms.

There is nothing in The Events that is suggestive of the Breivik shootings, however the themes are as much about that tragedy as it is about Dunblane, Columbine or Sandy Hook. As a play it is at once singular and all-encompassing; Grieg allows the audience to only see glimpses of the tragedy as the play instead looks at the deeper, more powerful questions that arise in the response to a tragic event.

The play is neither cast nor structured in a traditional way; perhaps rightly assuming that to tell the story through a linear narrative would lead to difficulties in ensuring each viewpoint was treated with equal weight, Grieg has chosen to refract a number of positions through his cast of two, and the community choir.

The result is an audience that remains distanced from the emotional impact of the action; an alienating technique that enables the play to take the form of a Socratic dialogue between the two actors. This is developed further in brief, direct interventions with the community choir, who often resemble a Greek chorus providing commentary on the action. 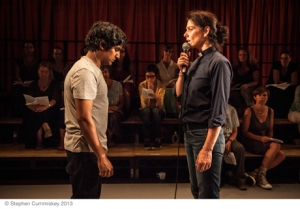 the community’s priest who set up the choir that was the focal point of the events, and who acts as a mirror to the audience in looking for answers and explanations for the Boy’s actions. Rudi Dharmalingham plays the Boy – always nameless – and all the other characters in the play.

Claire is on a redemptive quest to find understanding in the Boy’s actions in the belief that doing so will liberate her from a perceived survivor’s guilt. The audience follows her through brief, fragmentary scenes, as Claire tries to gain answers that will provide some form of justification for the events rather than them appearing a senseless act of brutality from which survival was little more than pure luck.

However Claire’s crisis of faith (in both the secular and religious world) helps to shape the deeper narrative, which is a dialogue that sets out the precariousness of modern liberalism when it comes under an extreme and sustained attack.  As a lesbian priest with partner and penchant for homemade bread, Claire may be something of a liberal caricature but in her belief and values Claire is reflective of the country that many of the university-educated, metropolitan middle-class assumes Britain to be.