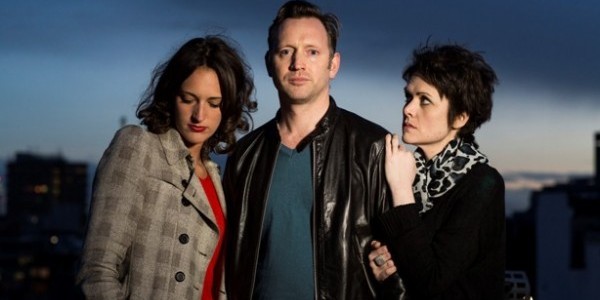 In the middle of one of the many conversations between Jo (Phoebe Waller-Bridge) and Harry (Rufus Wright) that tread an impossibly fine line between needling argument and verbal foreplay, Jo’s mobile phone goes off. The ringtone is familiar but not quite identifiable, moments later, before the chorus kicks in, Jo answers the phone with ‘Hi Mum’ and at the same moment you realise that she has set the ring tone to be I Touch Myself by the DiVinyls.

Vicky Jones’ The One is a play that is peppered with jokes that rely on an audience with an eye for high and low cultural reference points and a penchant for filthy dialogue. It is as comfortable expounding on Madame

Bovary as it is in displaying the realities of unengaged sex. There are some brutally funny lines in The One and there also some just plain brutal ones. It is a play that sets out to shock its audience and it more than succeeds in doing so.

DryWrite, the theatre company created by Vicky Jones and Phoebe Waller-Bridge, was the force behind two of the most unexpected treats of 2013, Mydidae and Fleabag. With The One this creative partnership have created a trio of plays that, while formally unconnected, work together to create a portrait of dysfunction within a certain strata of well-educated, middle class women in 21st century Britain. As a whole they form a serious and important contribution to the ongoing cultural debate about whether there are ways that women should live and behave in the context of feminism as being something that had been ‘won’.

Waller-Bridge excels in each of the plays. She inhabits characters that clearly show the challenges of women who have grown up to believe in the freedoms hard won by their parents but struggle to shape an identity for themselves in a society that is still undeniably masculine.

At the heart of Mydidae and The One is the presence of a formidably intelligent woman who self-censures herself in order to maintain the fantasy of the dominant male. In both cases the self-censuring has a warping effect and the emasculating quality of the action (even as it seeks to avoid this very outcome) ultimately leads to displays of violence; physical, sexual and emotional.

The One demonstrates writing of exceptional quality and Jones’ displays a real talent for carving heightened language out of the banality of the everyday; creating prose that is grounded in reality whilst seeming disturbingly unreal. That the play is set over the course of the evening and scenes are intercut with Phantom of the Opera’s The Music of the Night adds to the sensation that is closer to nightmarish dreamscape than the real world.

Yet this is no Athenian forest and here there is no honest Puck to make amends and to ensure that Jo and Harry ‘think no more of this night’s accidents’. Rather than sleep and awake to a new dawn, they continue their conversations until sunrise when they are forced to look at each other in the harsh light of day.