The Boy Who Kicked Pigs – Kill The Beast

Watching Kill The Beast’s The Boy Who Kicked Pigs unfold it becomes increasingly difficult to reconcile the narrator of this gothic horror show with the lovable, scarf-wearing time-traveller who regularly tops polls looking for the best Doctor Who. Yet Wikipedia tells me it is the very same Tom Baker who is responsible for this remarkably grotesque comic tale. 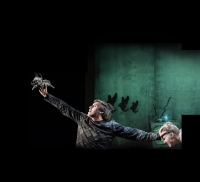 Underneath the story of Robert Caligari – the eponymous boy of our title – and his deviant pig-kicking ways lies the remnants of abandoned Roald Dahl tales, discarded Edward Gorey drawings 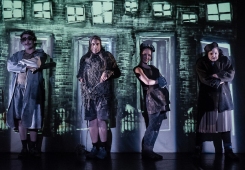 and the bottled essence of Hilaire Belloc and his masterful ‘Cautionary Tales for Children’. It is a marvellously entertaining story that confounds expectations all the way through to its frenzied, horrific conclusion.

Kill The Beast should be applauded for seeing the potential in the book. It immediately feels like the story has found its natural home on stage and is perfected suited to be retold in a fashion that wholeheartedly embraces the visual medium. It is initially hard to ignore the now rather clichéd Tim Burton aesthetic that dominates proceedings yet as the play continues other, more theatrical, influences makes themselves known. One senses that the best bits of 1927 ‘The Children and Animals Took to the Streets’ and, going further back, Shockheaded Peter and The Tiger Lillies have been absorbed and turned into something new and exciting here.

At its centre is David Cumming’s extraordinary performance as Robert Caligari. Put simply it is a terrifyingly intense display of cartoon insanity; rather as if The Joker had taken teenage form. His face is contorted into an almost rictus grimace throughout and his body attuned to the need to make every gesture and movement as extravagant as possible to fully play up his grotesquery.