Judging by reviews it appears difficult to talk about Man and Superman without first beginning by highlighting all the intimidating facts that surround it. So yes, it is three and a half hours of densely packed text, cut-down from closer to five, written by a formidably – and forbiddingly – intelligent committed socialist who straddled late-Victorian/early Edwardian Britain. And yes, back in 1903, it was described as ‘unstageable’.

With that introduction it may come as a surprise that tickets are also as rare as hen’s teeth (day seats and returns only). One suspects that it hasn’t been produced because the public have been crying out for a revival of a play that was last staged at the National two years before this critic had even been born. It is possible that the presence of an actor who can plausibly claim to be an A-lister of both stage and screen may be the cause of ticket scarcity.

Stage appearances by Ralph Fiennes have been limited over the last 15 years; he was last seen as Prospero back in 2011, in what was unfortunately a rather interminable production by Michael Grandage (a sentence I seemed to have repeated more and more in the intervening years), but reminded everyone of his talents with a blistering snippet of Pravda’s Lambert La Roux during the National Theatre’s 50 Years celebration in 2013. 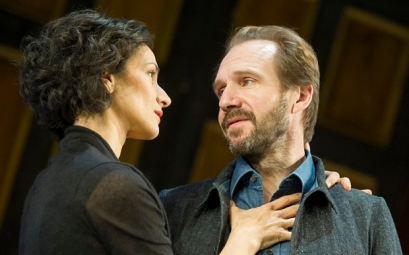 And what a performance it is. This is no stunt casting. No director would be foolish to let an inexperienced actor loose with Jack Tanner. The part is as difficult as they come. It requires the ability to enable a 21st century audience to find common ground with a figure who spends most of the play declaiming grandly about the machinations of women and who, one suspects, would only be happy marrying himself (and, as is the nature of such plots this is, in a way, exactly what happens).

The other difficulty is the sheer challenge of the language. The play runs to over 57,000 words and most of those are Tanner’s. Actors cannot rely on lovingly crafted Elizabethan verse-speaking to help settle the lines in the head, dialogue is akin to the densely packed social commentary of Dickens. When one hears Tanner it is hard not to detect the hectoring tones of Bernard Shaw in a room full of weary brow-beaten gentleman thoroughly bored with being told about the inequities of the Edwardian world. This is a challenging part, getting the wrong tone will lead to the comedy seeming tin-eared, or the moralising too earnest.

Fiennes is quite magnificent in the role. His performance fizzes with an energy that is vital for driving the momentum of a plot that seeks to extend a seemingly traditional comedy of manners into an epic spanning more than 200 minutes. Fiennes energy feels justified by the character – his vitality in keeping with the slightly pompous air of the revolutionary driven by ideology but supported by money.