There are few things more satisfying to a regular theatre goer than watching an actor emerge into the spotlight. Go and see enough plays and you soon realise that the same familiar faces keep on cropping up. The personal nature of the theatre – the intimacy of the shared space giving a sense of an assumed connection between audience and actor – can lead to a greater sense of investment and emotional connectivity with the actor than you find in film. Seeing actors like Phoebe Waller-Bridge (Mydidae and Fleabag) or Rudi Dharmalingham (The Events and Oresteia) develop has been the biggest privilege of writing this theatre blog over the last 4 years.

To that list it is safe to add the considerable talents of Jade Anouka (Henry IV and The Vote); currently at Soho Theatre with Sabrina Mahfouz’s Fringe First-award winning Chef. A one-woman show, Chef gives Anouka free range to showcase the considerable skills and highly kinetic performance style that was so captivating as a completely atypical Hotspur in Phyllidia Lloyd’s radical and brilliant Henry IV. 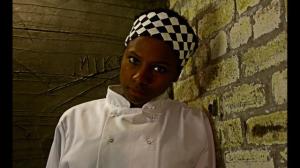 As a reviewer there is a lot of trepidation in viewing a one-person show. It needs an exceptionally high level of writing and acting talent in order to keep an audience from start to finish. Without any actors to bounce lines off there is a risk that the show will soon become one-note and tonally flat. A poor script can sometimes be hidden by action between characters but it dies on the mouth of even a talented actor, whilst a poor actor trying to deliver a strong script is one of the more painful theatrical experiences.

Sabrina Mahfouz is a recipient of a Sky Arts Scholarship Award for Poetry, and this background may be what grounds the play in the rhythms and structures of performance poetry. Whilst clearly a play, it feels highly sensitive to the flow of language, and is at times more interested in the beauty of language than capturing the naturalism of delivery.

It is unlikely that anyone would say “I’d never been in love / but I decided that I’d know when I was / because the man would remind of the way/ seagulls glide out of stalactite clouds, / suddenly, / smoothly, / that’s how he’d find me” but within the show – delivered after describing how she had left her estate and joined her dad on a fishing boat – it is given the dreamy lyrical wonder of someone who has just begun to realise the limitations of her world.