The Medium & The Wanton Sublime – Arcola Theatre, until 29 August 2015 (tickets) 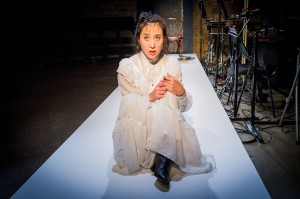 Now in its ninth year, Grimeborn stands as east London’s answer to champagne, strawberries and washed-out picnics on the South Downs. It must symbolise the gentrification of previously gritty London that opera, in the form of The Medium and The Wanton Sublime, had sold out on a Wednesday evening, and that no less a person than Joanna Lumley, the doyenne of Jaguar-driving men everywhere, was in attendance. Perhaps finding La Boheme or Tosca had sold out would have been less surprising, but these are not such well known pieces. The Medium is so obscure that it does not even warrant a mention on Peter 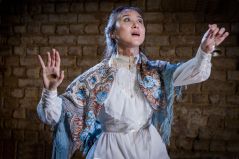 Maxwell Davies’ Wikipedia page, whilst The Wanton Sublime is an entirely new composition from Tarik O’Regan.

This blog does not profess to know much about opera, and was partly attending due to the strength of the festival’s wonderful punning title. However at around ninety minutes including the interval, the evening provides the opportunity for a taster session of what classical music is all about.

Both pieces are written to be performed solo, and are taken on by mezzo-soprano, Hai-Ting Chinn. From a lay-person’s perspective Chinn was fantastic in both roles. Previously seen in Einstein on the Beach, it must be strange to perform in the incredibly intimate Arcola Studio space. It places the performers within touching distance of the audience, and allows for a degree of intimacy that would not be possible in a traditional opera house. Chin handles this very well, and watching a singer close-up made apparent the amount of acting that goes on alongside the singing. It is a fascinating process as it takes a very different skillset to acting with written dialogue. The libretto must be sung which must make vocalising emotion difficult, and as a result much more reliance is place on externalised gestures (much as you would find in silent pictures).