They don’t make many like they make Thomas Ostermeier. That he is not on the tip of the tongue of British theatre-goers says more about the appallingly low number of productions that make it across the channel and the limited tours when if the even get here. An Enemy of the People was sold out for its five performances at the Barbican and I am certain if there was the bravery to finance a small tour then people would come. How can people 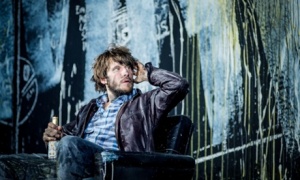 learn what they like if they never get the chance to see anything different?

The glorious thing about watching an Ostermeier production is that while you may not know quite what you will get, you know it will still be a quintessentially Ostermeier affair. For, yes, we are back in the realm of the director as  auteur. Cue much huffing and puffing from the comment boards and cue rapturous, and occasionally unthinking, applause from everyone else. An Enemy of the People is the latest to hit the Barbican and follows on from a radical Hamlet that tore down almost every Shakespearian convention and reinvented the play from the grave up. 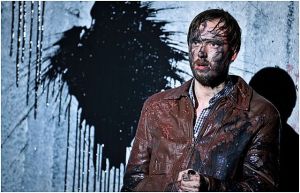 Ostermeier seems to be a man who will be anything but be dull. He brings his own hyperactivity to the text and energises performances far past what audiences should find comfortable; Hamlet clocked in at 168 minutes without an interval, and An Enemy of the People doesn’t fall far short at 150. Yet the quality can be seen that, despite the ridiculous running time, the audience sat in rare rapt attention, with not a rustle or toilet break to be seen disrupting the action.

An Enemy of the People is not without flaws and there is a nagging suspicion that Florian Borchmeyer commits serious logical fallacies in trying to bridge his adaptation of Ibsen’s text with a modern element that draws on the anonymous 2007 paper, The Coming Insurrection. However these flaws don’t destroy the integrity of the play and should be placed in the context of the vitality of the production and the creation of a theatrical experience that genuinely led to an enforced, and welcome, assessment of my own political values.

That the modern element fails is a shame due to the fact that Ibsen’s own play is so strangely contemporary that it barely needs updating to maintain its resonance. The idea of the small, righteous man standing up against a society that does not want to hear his truth has never gone out of fashion and has grown in stature in recent years, with the Young Vic staging a 1970’s set version last year.