Carol Churchill is a playwright that I always feel I should know more about. She writes clever, spiky, experimental theatre and is one of the rare playwrights to critically engage with themes that toy 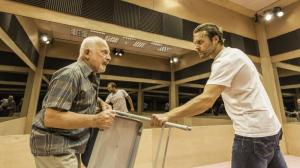 with what some rather  snobbishly decry as science-fiction. Her consistency over four decades of writing plays for stage and radio make a strong candidate for the title of ‘Britain’s greatest living playwright’ following the death of Harold Pinter in 2008 and that alone is enough to make her worthy of considerable interest.

Whenever I read a description of her plays, such as the mixing of historical and fictional women in Top Girls, the rhyming verse of Serious Money, using the Putney Debates in Light Shining in Buckinghamshire or the Brechtian Vinegar Tom, I cannot help be fascinated by the striking originality and clarity of her vision. She rarely seems to experiment for its own sake; her plays appear to have a cohesive and clear sense of what they want to be and how they want to achieve it.

A Number is an appealing science-fiction two-hander on cloning that mines the idea of how knowledge of a replicated self can impact on a person’s sense of identity, but with Churchill’s characteristic sharp eye also delves into psychoanalytic ideas around the impact that the parental environment has on the adult self.

The play is performed excellently by father-son duo, John and Lex Shrapnel, and is never less than interesting. It takes the form of a series of intense, tightly-framed duologues between the father and versions of his son. The audience is kept off-kilter by jumps in time between scenes, and a lack of framing to the wider world. We must pick up our cues from the conversation as it unfolds in front of us.

It is doubtless Churchill’s intention to leave you slightly unbalanced and trapped within the Father’s personal unravelling. Initially sympathetic, the revelations across the conversations reveal an ever-more monstrous side to his character, and the havoc wreaked by his choices many years ago echo down the generations to the present day. This is brought out most clearly in the last conversation with a version of his son that was entirely separated from the father. He is the most at peace with the idea of being a clone and is the one who had least closeness to the original family.

In recent days we have had announcements from both the Royal Court and Michael Grandage of their upcoming seasons. Representing the very different ends of the theatrical experience for audiences; the small intimately thrilling Royal Court where so many of our great playwrights were given a space to write and the cavernous and wallet-sapping Noel Coward Theatre, the name alone indicative of its West End heritage. It is heartening to think of Grandage’s past as Artistic Director of The Crucible and a ten-year stint at the Donmar and realise that it is still possible to trace a line from the heart of regional theatre all the way to the money-making centre of the British stage.

One might grumble about the prices of Grandage’s plays but it cannot be denied that a West End line-up containing two Shakespeare’s, a McDonagh and a new play by John Loga, whilst, maybe not groundbreaking, provides rather more interest than the usual fare of rehashed musicals, Coward revivals and vehicles for ageing American celebrities. Ticket prices may be steep at the top end but, as I have commented elsewhere, the £10 tickets actually undercut the National’s Travellex offer and, if star power is what you are after, provide fantastic value for money. Whilst advertised as ‘moderately restricted view’ I have found the seats to be absolutely adequate and you would miss virtually none of the action. Given they are available in both the Royal and Upper Circles they arguably offer better value for money than the Gallery tickets that are the next cheapest but are  already edging towards an uncomfortable £27.50 for seats right up in the gods.

With information about the National Theatre and the Barbican already available we can see that the upcoming months look very rosy indeed. And as a public service, Civilian Theatre is very happy to provide you with a month-by-month guide to the most interesting plays over the coming months (a growing requirement as it is becoming more and more evident that theatre is going the same way as gigs and stand-up comedy and selling its major events anything up to 18 months in advance – Jude Law in Hamlet in November 2013 anyone? Not busy I hope?)

This may be a last chance to catch one of the most interesting and innovative musicals in recent years. It sadly had the misfortune to go up against the Matilda juggernaut in all the major award ceremonies and as a result came home empty-handed but this tale, based on documentary footage taken from Ipswich in the aftermath of the discovery of five bodies in 2006 and put to music by Adam Cork, is one of the most complex and affecting new musicals in a long time. A real slow-burn hit, its success can be seen in the major summer revival it was given by the National just a year after it was first introduced. September is possibly the last time you will be seeing it in quite a while so go while you can.

Hopefully not setting myself up for a fall after the general disappointment of Cate Blanchett in Big and Small – where the size of the play failed to meet the stature of the actor – we see Juliette Binoche meet Strindberg as another entry in the Barbican’s generally excellent international programming. Binoche is one of the deserved greats of French acting; an actress capable of turning down Spielberg’s Jurassic Park for a role in Kieslowski’s Three Colours: Blue (now that is range). The set photos are fascinating and suggest a radical take on a work famed for its naturalistic excellence:

Whilst not to everyone’s tastes, a new play by Caryl Churchill is certainly not something to be ignored. One of Britain’s leading playwrights over the last 40 years and an icon for the current generation of female writers who grew up on Top Girls and Cloud 9, Churchill returns to the Royal Court with a new play, love and information. Details are scarce other but it looks likely that it will be a continuation of Churchill’s abiding fascination with non-linear story-telling and the use of the less naturalistic elements of theatre, as she creates a panoramic landscape of over 100 characters.

In what was very high up Civilian Theatre’s ‘Must Watch’ list was this import from Denmark – The Tiger Lillies performing Hamlet. Unfortunately recent news tells us that it has been cancelled for ‘scheduling issues’ but if they can find a slot for it in 2013 then I urge all to go and see it. The Tiger Lillies describe their own music as Brechtian street opera and are instantly memorable for all of those who had the fortune to see their version of Shockheaded Peter many moons ago. For those who have missed their vaudevillian morality tales then here is a performance of a song from Shockheaded Peter:

For more on the Autumn Season, including highlights from October and November then please click through for more.