Earlier this year Civilian Theatre found itself in the stifling surroundings of Eat, Pray, Love Drink, Shop & Do to see Popup Opera perform Le Docteur Miracle; a marvellous little piece that lingered in the memory more for the quality of singing and the near brute-force goodwill on display than for a venue so cloyingly twee that a Zooey Deschanel guest appearance didn’t seem out of the question.

A similar proposition in the height of summer did leave cause for concern but this was almost immediately offset by The Whip; a period cocktail bar that may be painfully on-trend but at least it is dedicated to rehabilitating that 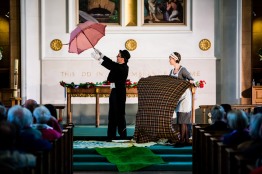 forgotten classic – the Mint Julep; a more appropriately summery concoction it would be hard to think of.

Julep in one hand, Mozart programme in the other. It is easy to begin to feel like being part of a world long left behind. The limited seating and period furniture gives the event even more of the sensation of being part of an audience invited to an Edwardian stately home for a summer party rather than to a room above a pub in Mayfair.

It is this to

ngue-in-cheek nod to refined gentility that Popup Opera are so good at selling. Even Harry Percival’s avuncular presence before and after the show comes across as a charmingly pleasant Hooray Henry hypeman.

One of the more appealing things elements of a Popup Opera show is their inventiveness towards setting. They clearly recognise the constraints of the limited space and the need for a touring production to be highly adaptable, and there is a wonderful malleability that is carried across in a very carefully managed shonkyness to proceedings. This is testament to the quality of Darren Royston’s direction and the skill of a cast forced to combine the ability to perform Mozart’s score with a sense for comic timing and knack for audience management. It is a far more demanding performance than it may first appear.

Not being remotely qualified to comment on the technical quality of the singing, I can only say that a layman only requires two things from opera; to enjoy the singing and to understand what is going on. The cast are excellent on both counts. From the start you feel that you are in safe hands, with particular standout performances from Adam Torrance (Ferrando), Eve Daniell (Fiordiligi) and Clementine Lovell as the scene-stealing Despina.