It is only fair to begin with a disclaimer: this reviewer does not like Tennessee Williams. It is not for want of trying and it is also appreciated that Civilian Theatre is very much in the minority with Williams being held in the highest esteem by a great many people who know a great deal more about the theatre.

However the point stands and after spending close to three and a half hours watching the Young Vic’s current production of A Streetcar Named Desire, and quite a bit longer letting opinions slowly ferment in the darkest 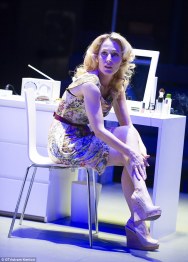 recesses of the brain, it can only be concluded that we are faced with a conundrum – and that is how far a production can be even-handedly reviewed when the play itself is not personally held in particularly high regard.

Benedict Andrews’ stunningly visual and sumptuously performed version of Tennessee Williams’ most famous (and possibly greatest) play wonderful demonstrates the edge that theatre has over other narrative mediums; for in general every piece of cinema is seen as a new piece of cinema, even when a character – such as Frankenstein – is returned to we do not recognise it as the same film produced differently.

Perhaps only, outside of films that began life as stage plays, Gus Van Sant’s almost shot-for-shot remake of Psycho could be considered a genuine replica, and a 37% Rotten Tomatoes rating tells a story all of its own. Literature, that other narrative medium, is tied to its form and could never bear complete repetition of language even as it continually retraces its steps over stories passed down across generations.

It is only theatre where audiences are satisfied by directors going back to the same well – to Shakespeare, to Euripides, to Chekhov, to Williams – and seeing what can be made from the same materials. This desire allows a director to try and breathe new life into familiar conceits and allows the audience to revisit their favourite plays or continually challenge themselves against work that doesn’t appeal to them.

And so begins Civilian Theatre’s obsession with Tennessee Williams (and was there a more appropriate playwright to develop an obsession about?) Regarded as one of the great American dramatists, and with an undoubted flair for writing memorable characters, Williams’ stock is such that he is part of a very small band of playwrights that the commercial West End will take a chance on. As a result over the years this reviewer has watched (or perhaps endured) Night of the Iguana, Cat on a Hot Tin Roof, Baby Doll, The Glass Menagerie, The Fat Man’s Wife and now, finally, A Streetcar Named Desire. With the exception of The Glass Menagerie they have proved mainly dispiriting affairs where the southern melodrama successfully manages to match the ripeness of the language with equally ripe performances.

That production of The Glass Menagerie, at the Young Vic in 2010, was built on the back of an exciting new director in Joe Hill-Gibbins, two breakout performances from rising stars, Kyle Soller and Sinead Matthews (everything from Master and Margarita, The Changeling to Blurred Lines in the last couple of years) and a wonderful score. It demonstrated that no matter what you think of a playwright, or his style of writing, it is possible to extract excellence; for even the biggest critics of Tennessee Williams would never deny that the man could write (unfortunately he writes so well he sometimes seems to forget to know when to stop).As it happens A Streetcar Named Desire not only has an exciting director in Benedict Andrews, two breakout performances from Ben Foster and Vanessa Kirby (brilliantly taking more than she was given as Isabella in Edward II, and doing a similar job with Stella in Streetcar), and an interesting musical score. It also gives us an ingenious set design and a crackerjack lead performance from Gillian Anderson as Blanche DuBois.

Well the plays have been revisited, the little grey cells put back into action and the oracle consulted. In short and without further ado, Civilian Theatre is proud to present the runners and riders in the inaugural shortlist for The Civil Awards. [Cue much fanfare, fireworks and underhand, dirty trick campaigns].

Bribes, whilst having little effect on the outcome, will still be gratefully received. Your comments and opinions are also welcomed.

Winners will revealed next week following a countdown of the Top 10 plays of 2013.

Theatre / Theatre Company of the Year

Surprise of the Year

Best thing to happen in theatre in 2013

Biggest disappointment of the year

Worse thing to happen in theatre in 2013

Much of the critical reaction to the National’s production of Marlow’s Edward II has been withering, and for generally mild-mannered reviewers, bordering on the vitriolic. Leading the charge is, inevitably, Quentin Letts in The Daily Mail who suggests the ‘the only thing murdered in Joe Hill-Gibbins’s puerile, inept production is the play itself’ (ouch) and is followed, perhaps rather too stridently, by Tim Walker in The Telegraph who found ‘In almost 10 years of reviewing 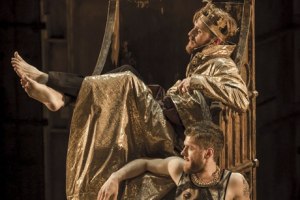 theatre, I doubt I have been confronted with a bigger load of indigestible old tosh’ and couldn’t help but the boot into the subsidised sector while he was at it; ‘the kind of production that simply could not happen in the commercial West End.’

Many people would doubtless agree with Mr Walker’s final sentence but the despair being aimed less at the National and more with eyes turned pointedly north of the river at the risk-averse nature of the private sector behemoths; happy to suck up the most profitable of the tried and tested subsidised productions before reverting back to a steady rotation between Noel Coward, Alan Ayckbourn and A.N Musical complete with X-Factor star.

If the overt agenda setting of Mr Walker’s column can be ignored– and the reference to‘comrades’ at the National rather says it all – it makes an important point in reminding us that the licence to put on a production this lavish ultimately comes from the public purse.

Joe Hill-Gibbin’s is a talented director who had great success at the Young Vic but his career trajectory is taking a worrying turn towards the excessive. A bright start led to a stint at the Young Vic where he created a stunning yet simple

revival of Martin McDonagh’s brilliant Beauty Queen of Leenane and directed the only Tennessee Williams production I have ever managed to enjoy (The Glass Menagerie).

He scored an unexpectedly huge hit with the fun but rather too hyper-kinetic The Changeling, which showed a suffusion of talent but equally there were times where a restraining hand might have been called for. It is troubling that on the grandest stage of all Hill-Gibbin’s has not only failed to adjust his style but that the flaws, rather than being flattened in the vast space of Olivier, have only been magnified.

Whilst we must allow artistic companies the freedom to make mistakes, watching Hill-Gibbin’s exuberant production reminded me of the wisdom of Bob Balaban’s protective mother in A Mighty Wind justifying the use of a Shetland pony to play polo on the grounds that ‘if he has to fall, he shouldn’t fall from so very high’.