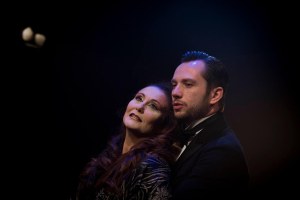 For over a year I only heard wonderful things about Thom Southerland and how he had a magic touch when it came to staging ridiculously impressive musicals in theatres that should have been far too small to do them justice. His version of Mack & Mabel (long a favourite of the cognoscenti) was longlisted for the Evening Standard Best Musical 2012, whilst he repeated the trick the following year with the decision to attempt a staging of Titanic at the Southwark Playhouse.

So it was slightly disappointing to discover that by the time Civilian Theatre got round to seeing his shows, the magic seemed to have become a little more elusive. The Mikado at the Charing Cross Theatre was fluffy, fun but ultimately inconsequential, whilst The Grand Tour at the Finborough was a curio but didn’t fully hang together. Both pieces demonstrated hints of brilliance but never quite delivered.

As a result it is a great pleasure to announce that his revival of Grand Hotel at the Southwark Playhouse is absolutely spectacular. Right across the cast through to the choregraphy, direction and staging – there is very little to fault with the production.

And this praise comes from a reviewer who could distinctly remember being unimpressed by the 2004 Donmar production (even if he couldn’t remember exactly why he didn’t take to Grandage’s version). It may have been an off night for the cast or the audience member, but since then I have rather dismissed it as a musical.