Under Rupert Goold’s unusually restrained direction, the Almeida Greeks season closes with Rachel Cusk’s brutally open updating of perhaps the most intriguingly ambiguous of ancient tragedies, Medea. It is a production teetering on the edge of brilliance and one that leaves no doubt that there are few stage actors who can match Kate Fleetwood’s ability to humanise the most complex of characters.

Watching Medea, and reflecting on Oresteia and Bakkhai, the carefully chosen nature of the three plays becomes apparent. In the ancient world, the personal, political and religious were fundamentally intertwined but the strength of Goold’s season has been to disentangle these threads so as to give them a clearer contemporary relevance. The season opened with a stunning reinvention of Oresteia – a political tragedy in so much as it was a tragedy of events, where a forced decision leads to an endless echo chamber of destruction. This was followed by Bakkhai, where tragedy is orchestrated by a capricious and vengeful god.

Medea is a problematic play because for all its greatness, it has an almost unresolvable contradiction at its core – as much as we can see Medea as a wronged figure, the act of filicide can never be seen as justifiable to a modern audience. This was precisely where last year’s version with Helen McCrory at the National, based on a Ben Power translation, became unstuck as it updated the setting without finding a way to modernise the plot. 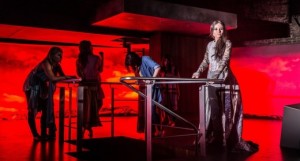 To get around this problem Cusk has substantially reworked the play to the extent that a person could watch this production and not realise that it is taken from an ancient Greek play. Purists may decry the lack of poetry and question whether this is can truly be called Euripides’ play given the narrative reworking that takes place. This should be countered by the fact that it arrives with the note that it is a new version by Rachel Cusk, and that the myths have always been adapted to meet the needs of the time.

Where Goold and Cusk succeed is to entirely reimagine the play. It is not a tragedy brought about by the divine, or by individuals caught up in grand events. It is a tragedy found in the domesticity of everyday life. Cusk’s interpretation thrusts the play into the modern world. The time of gods has passed and instead we live in a world of men (and the use of the word ‘men’ is entirely intentional).

Medea has become a domestic tragedy about family breakdown. It is a snarling, vituperative text that sets Jason against Medea, with the children a battleground and reputations as weapons. Anger courses through the play, and confrontations between the two are ferocious all-out assaults that have a dangerous, spiteful venom rarely captured on the stage.