One of the most shocking things about this production of Euripides’ Medea is the discovery that it’s the first time that the National Theatre has staged it in its 50 year history; a startling omission, and all the more appalling 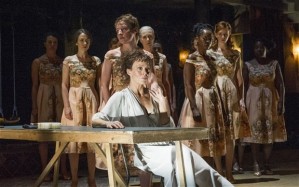 when you consider the legion of fine female actors that have graced the stage in that time.

When you consider the paucity of roles for women in pre-20th century playwriting then to ignore one of the great tragedies is astonishing. Medea, more than many of the surviving plays of ancient Greece, has retained its relevance to the modern era as it can rely as much on an understanding of human psychology as it does on the intervention of the Gods.

That it was never picked by the National to ‘inspire debate’, if for no other reason, during the height of the fight for gender equality; it seems an obvious candidate, although a firm hand is needed to steer Medea away from a conspicuously Congreve-inspired ‘…hell a fury like a woman scorned’ and closer to Shakespeare Lear who saw himself as ‘...More sinn’d against than sinning’.

It is a crucial distinction; it is difficult to separate Medea’s anger at Jason’s actions from her anger at her own impotence, but it is essential to make this seperation if Medea is going to be humanised as a tragic figure in her own right. It is like Lear in the storm; we may not fully believe in his argument or in his call for the gods to execute justice on his behalf but we have to believe that his raging is at least partially justified.

Carrie Cracknell clearly believes it would have relevance in the past having seemingly set the play in the 1970s; the period was a boom-time for psychoanalysis and self-discovery, and Helen McCrory’s Medea approach and understanding to her problems is often as someone who has spent time assessing themselves on the couch. The era is reinforced by Tom Scutt’s beautiful design and immediately recognisable period furniture. The plate glass window and minimal lines could come as easily from a Mediterranean villa as they could from a southern Californian hillside. 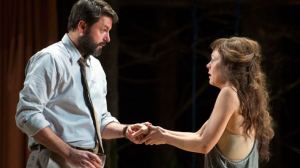 Over 2014 Cracknell has directed three plays and, along with the A Doll’s House at the Young Vic in 2012, there are clearly thematic links between them. She seems fascinated in the fragility of the individual and particularly those who deliberately set themselves against the grain. A Doll’s House, Birdland and Medea all contain protagonists who must bear the weight of societal pressure to conform; these people are not, in themselves, naturally heroic but find that they cannot bring themselves to act in any other way.

The third play – her collaborative effort with Nick Payne – was Blurred Lines highlighted another theme central to her work; an interest in women and the position they are held in by wider society. Blurred Lines was a painfully powerful expression of real lives, a melange of stories, thoughts and opinions that traversed the spectrum from bleak and melancholy to humorous and life-affirming. A Doll’s House is an established genre-defining work and Medea, well for Medea to work it needs to show the internal complexity that can push a woman to commit what continues to be one of society’s most horrifying taboos.

Helen McCrory is an actress more than capable of producing the subtleties necessary for the role. At 5’4 and with a face that has a pixyish quality McCroy is perhaps not the Medea of the imagination – all strident, astringent anger and physically domineering as the fury whips up around her – and against Danny Sapani’s burly Jason it is apparent that she is never going to go toe-to-toe with him.