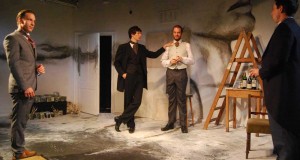 There are some historical figures that give out a siren’s call to literary types, luring them in and then dashing their hopes of genius on the rocks of their own creativity. Shakespeare, Marlowe and Byron have long drawn in 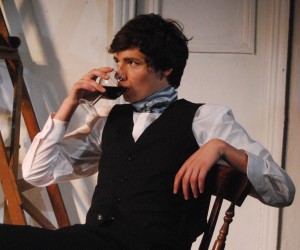 the unwary who believe they can find their own light mirrored in the brilliance of others.

Oscar Wilde is another who appears a figure ripe for drama, whose life can be used to both illuminate his own age and reflect upon our own. The problem with Oscar is that he is a man who created such a complete character of himself – set down in his writings and in the aphorisms that survive him – that anyone attempting to write about him needs to be able to match Wilde’s own wit or appear a pale imitation.

The Picture of John Gray – a neat subversion of Wilde’s novel – has perhaps taken heed of the problems that Wilde’s formidable wit poses and tackles the subject at an oblique angle. C.J Wilmann’s play skilfully tells us something about Wilde without the man ever appearing; instead we hear the voices of his associates and as we learn about them, we see Wilde from a new perspective.

It is a play with an Oscar Wilde shaped hole in the middle. It is a bold decision that runs the risk of creating a personality vacuum at its centre – like rewriting Hamlet and focusing entirely on Horatio, Laertes and Ophelia. However it makes the point through his absence that their lives – John Gray, Bosie and all – are, whether they like it or not, indeed whether they particularly care for him or not, irrevocably shaped by him.

Wilmann succeeds in demonstrating some of Wilde’s charismatic force without him ever being present. His personality is what holds them together and they continue to revolve around it and, terribly, it is what pulls them apart. The destruction of Wilde destroys something in each of them and forces their transformation.

Wilde is akin to a tropical storm – exotic, sublime and hypnotic- and they are caught in its eye. The innocent optimism that comes from the still landscape – captured in Bosie’s poem of the love that dare not speak its name – is but a shimmering mirage and too late do they realise the impossibility of escaping the destruction that Wilde has brought upon them.