This is how we die – Battersea Arts Centre, until 14 November 2014 (tickets – returns only)

At the end of Christopher Brett Bailey’s performance of This is how we die the audience are subjected to – and it is a case of being subjected to rather than being passive observers of – a sonic assault that is best imagined as the sound of an imploding, decaying universe and the tentative hope that something new and beautiful can rise from the fading flickering light. The stage lights turn their impassive bulbs on the audience, bathing the

observers in a harsh, unforgiving light whilst ear-shattering, fuzzy rhythms rise and fall, roll and repeat, looping and overlaying motifs amongst discordant sounds. It is the white-noise of paranoia and of an overwhelmingly claustrophobic hopelessness. And then suddenly, within this kaleidoscope of fear, emerges the purity of higher-pitched strings, cutting through the chaos and providing the possibility of escape.

This antagonistic ending, this attritional warfare waged between performer and observer is only eight minutes long but it could easily have been eighty. It is a wonderfully considered reflection and response to the sixty minutes that come before, and adds to the impression that Christopher Brett Bailey has talents and intelligence far beyond being a highly articulate performer blessed with startling verbal dexterity. 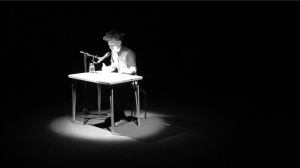 Having not previously heard of Bailey, and without looking at the show’s synopsis, I hadn’t really considered what to expect. Whatever I might have expected wouldn’t have come close to the reality. This is a performance that is felt rather than seen. The audience are almost immaterial; nothing has been created for our benefit. The stagecraft is defiantly un-staged. It is a man at a desk, talking, talking and continuing to talk, from notes, for sixty minutes, without stopping, almost without breathing, he continues to talk, to himself, to the walls, to the room, whether the audience is in the room or not, it feels as if he would continue to talk, possibly until all words had become exhausted.

It leaves you in a state of mental and physical exhaustion. Listening to the dialogue, focusing on the words is mentally draining, but there is also palpable tension, as a result of a deliberately abrasive delivery style, that creates an adrenalin rush so intense that by the end of performance you leave the auditorium woozy, unsteady and in need of air.

Bailey arrives as an unassuming, almost diffident presence – perhaps the only hint of what is to come is the resemblance to a young David Lynch – but as soon as he begins he exerts a magnetism that pulls in whatever direction the flight of fancy will take him. He is a remarkably assured performer and is blessed with a lyrical nimbleness that allows what, are assumed to be, tightly crafted pieces the air of stream-of-consciousness dialogue.