At its heart 1927’s Golem is a modern reworking of Gustav Meyrink’s 1914 novel, Der Golem, which itself was a retelling of the Prague Golem stories. The legend is a classic piece of Jewish folklore and the oldest narratives date to the Talmud and the very beginnings of Judaism. It is a story that has always held an instinctive appeal. In its most basic form it is about creating life out of

inanimate matter something that can be identified in most of mankind’s origin myths but as society advanced something about the golem has meant the stories have retained their relevance. Golem’s stories became intertwined with its purpose as he unstoppable, implacable slave of its instruction. It can be seen in the mechanisation of the modern army and again in the prism of the Industrial Revolution that saw the skilled worker become expendable in the face of technological improvements.

The golem, in its nether-changing silence, seems always to reflect the images that a new generation projects upon it. 1927 are just the latest company to breathe life into the clay man and they do so with an extraordinary visual flair and breath-taking inventiveness. Whilst their central conceit, that modern society is a troublingly homogenous mass of cultural identity and branding, is not particularly original and also rather debatable, what cannot be denied is the originality 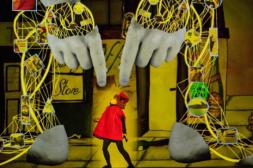 of the company themselves and that they have, with Golem enjoying a sold-out residency at the Young Vic, announced their arrival as a major player on the UK theatre scene.

So what makes 1927 so impressive? Simply put they are leading the vanguard of companies that are using visual effects to question the limitations of the traditional theatrical space. VFX have been a game changer in challenging assumptions about what stories can and can’t be told on stage, and with Golem we are seeing theory turned into practice. Whilst it is not the perfect production – the quality of design, costume and musicianship does outweigh the quality of acting and writing – as a statement of intent it certainly leaves its mark.

VFX are used throughout the West End to provide the ‘value added’ – that extra little bit that makes you feel you haven’t wasted your money and time on a show. However if it is seen in these terms then it is little surprise that VFX rarely do more than add pizazz, it is far rarer to see VFX used to deepen the narrative or to have been carefully considered for its use in producing more complex sets.

The first time I was really aware of the power of VFX was in 2005 with the Menier Chocolate Factory’s wonderful production of Sondheim’s Sunday in the Park with George. It used technology to move the audience between the Art Institute of Chicago and the banks of the Seine. Watching Daniel Evan’s Seurat ‘paint’ the pointillist masterpiece onto a virtual backdrop was to see for the first time the possibilities that VFX brings to the theatre, and to see a narrative that was immeasurably strengthened by being integrated with the technology.

One thought on “Challenging uniformity in life and on stage.”