On sitting down to enjoy a post-show drink the friend I invited to this intense interpretation of the first part of Dante Aligherei’s Divine Comedy, the 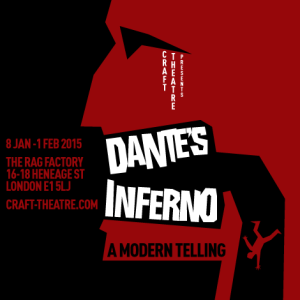 14th century epic allegory of a man’s descent through the nine circles of hell, sheepishly admitted they may have told colleagues they were going to see Dante’s Peak.

Well, one can but try.

Full disclosure leads me to sadly announce that at The Rag Factory there was little sign of either active volcanoes or renowned vulcanologist Pierce Brosnan.

Instead audiences had better buckle up and prepare themselves for 80 minutes of earnestly performed theatre that attempts to blend the meditations of an early renaissance literary masterpiece with the post-1970’s politico-spiritual philosophies recently given a new lease of life through the ever enthusiastic talking head that has become Russell the Brand.

There is something thrilling about watching a young company work through the process of creating a form of confrontational theatre of their own.

And Craft Theatre certainly know how to talk a good game. Their website is full of intriguing statements about how they have “a practice that allows the actor to understand and become master of their body, emotional reservoirs, and internal mechanism. Our unique way of working keeps the actor present, authentic, grounded, and always searching for development”. And some of the rest is perhaps best left to Private Eye’s Pseuds Corner.

The working techniques reference the incorporation of physical exhaustion and identity deconstruction, which on the surface doesn’t seem entirely pleasant but at least sounds more appropriate for Dante’s Inferno than for, say, The Importance of Being Earnest.

It contains several lovely moments that suggest a level of trust between performers not always evident on stage. In particular the bedroom scenes between Dante (Lucas John Mahoney) and his partner (Maria Swisher) display a naturalistic intimacy more often associated with US indie filmmaking, and it provides a realism that grounds Mahoney’s Dante in the world we recognise.