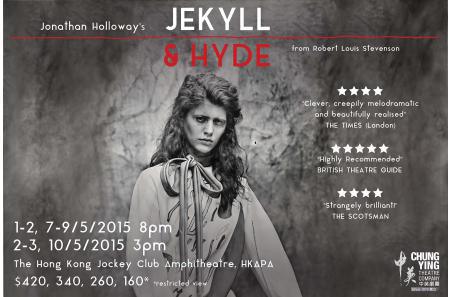 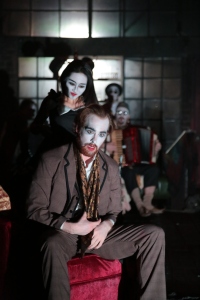 Whilst different artistic pursuits offer their different pleasures, theatre offers something that art, film, TV and literature struggle to match; it is the only medium whose primary output is never static. Either a production reworks an existing play or it is new work that is in a constant state of evolution. There is also never just one output, each performance will be unique and, in a longer running show, a company is likely to seek improvements by continuing to tweak the production.

It is the last of these reasons that drew me to Jekyll & Hyde at Platform Theatre. Two years ago Red Shift partnered Flipping the Bird to produce an adaptation of Robert Louis Stevenson’s famous story. My recollection is of a frustrating experience as it showed real promise but was undermined by a script that ought to have gone through several more drafts. (Previous review here).

Having gone through the Edinburgh experience and onto China after the Chung Ying Theatre Company recruited Red Shift founder, Jonathan Holloway, I was fascinated to see how the play might have transformed. There was anticipation over finding out how cultural collaboration had affected it, and how it been altered in the interim.

The results, to be perfectly frank, were disappointing. The play, rather like Dr Jekyll, seems to be suffering from a crisis of identity.

Mr Holloway has come up with a neat premise (altered from the previous version), where Dr Jekyll is a woman looking to transform herself into a man due to experiences suffered in her war-torn homeland. Transformation becomes a survival mechanism, and her physical transition is accompanied by a psychological one so that Hyde is a manifestation of that which she most fears.