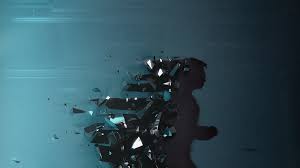 If it is not surprising that there are aspects of the modern world that barely exist on the stage – the sheer ubiquity of mobile phones, the centrality of TV and increasingly the internet to our lives – it doesn’t mean that this is a position that shouldn’t go unchallenged. It is true that traditionally these objects and our interaction with them have been seen as profoundly un-theatrical; they are products that led us to insularity and internal monologues, they are still and render us likewise. However it is up to theatre to challenge these assumptions

So to see The Nether, a play that tackles the internet – or at least a future-net – on the main stage at the Royal Court is a welcome sight. That it is supported by snazzy graphic designs (Luke Halls) which blur the transition from the real to the virtual world signals that some thought has gone into how to dramatise such a personal, internal activity – and, once again, it showcases just how far technical effects for the theatre have come.

It follows hot on the heels of Privacy at the Donmar and, whilst covering very different ground, they share an attempt to demonstrate that theatre is a medium that can not only engage with human and social issues but also has a role in challenging audiences on the technological issues that are increasingly blurring the boundaries between internal and external thought and action.

To describe the plot risks giving away rather too much of what makes the play an interesting watch. Although since the Royal Court refers to the fact that it is about a ‘virtual wonderland’ and that it covers ‘paedophilia in a digital world’ it doesn’t take a whole lot of imagination to recognise that this is a play that, in the words of a BBC voiceover, ‘some viewers may find offensive’. 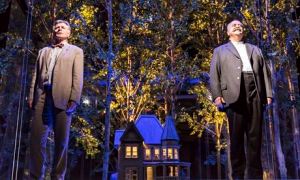 That said this reviewer is surprised to hear talk of walkouts from the audience; whilst the concept may be distasteful, the production itself is pretty clean-cut and there is nothing that comes close to Blasted or Ubu in terms of disturbing visual imagery. In fact if anything the casting of the child actor (Zoe Brough as Iris – and exceptionally good in the role with a stunning, and quite disturbing, maturity) has perhaps restricted how far they could push the elements that people would find most troubling.

There are a number of problems with the play. Despite the sterling work of Luke Hall’s visual imagery and the wonderful Victoriana set design by Es Devlin, the play never rids itself of very static direction. This is not helped by the writing that turns every other scene into a dialectic between two sides of the argument, and setting these conversations in an interrogation room leaves very little freedom for movement.

Jennifer Haley’s script has nice touches but is also surprisingly weak in a number of areas; the core problem is that Haley strives for balance between her characters in order to create a ‘debate’ and make the play something more than a moralising rant. However the challenge of creating balance when one character is clearly morally repugnant has been tackled by making the ‘other’ appear artificially weaker and flawed. The balance is upset because Amanda Hale’s Morris has been nobbled from the get-go and will never match the personality given to Stanley Townsend’s Sims. As a side-note, it is almost impossible to believe that these names aren’t supposed to evoke the world of Pinter but sadly the dialogue itself falls rather short of this.