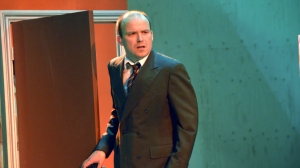 Given the number of perplexed reviews that accompanied Richard Jones’ production of Kafka’s The Trial, it is a surprise that so many critics avoided the obvious puns the title allows (the honourable exception naturally goes to the Daily Mail). This production certainly reinforces the impression that Richard Jones is a director whose work divides critics between those who feel that his directorial hand does not give the text a chance to breathe, and others who find value in the kitsch lunacy that he establishes through his visual style.

It is a style that is so unique as to be instantly recognisable. The importance that visuals play in his work means that credit ought to be shared

with his regular collaborators; designer, Miriam Buether, and costumier, Nicky Gillibrand. In both Public Enemy (his reworking of Ibsen’s Enemy of the People) and The Trial, he creates a world that could have come out of a Lynchian vision of a Californian wife-swapping party. The colour palette leans defiantly towards the 1970’s and is almost aggressively lurid. Yet behind the warmth of the orange and peach tones he establishes a clinical coldness that is reminiscent of Kubrick’s best work.

The Kubrick reminder can hardly be avoided as Nick Gill’s translation gives Kinnear’s Josef K an internal monologue written in a form of English that is not so different from Alex in A Clockwork Orange. This is the most problematic aspect of a mostly enjoyable production. Having spent a week reflecting, I am no closer to why the decision was made to give Josef K this curious internalised language. The play appears to suggest The Trial is located in sexual angst (a contentious point in its right) and Josef spend much time recounting the historic fantasies that have turned him into the person he has become. It might make sense that the dialogue was babyish, as it would lean towards giving the play a Freudian spin, but instead it is more of a freeform organic narrative that flexes adult English to its own purposes.